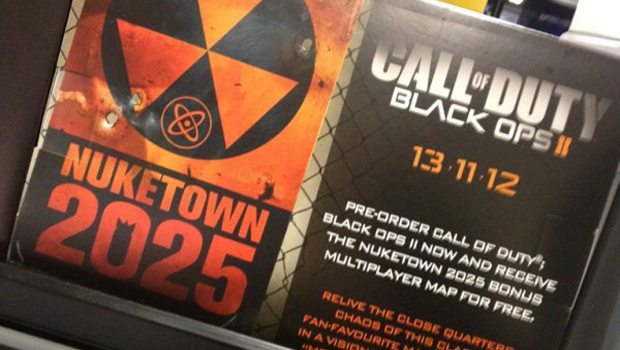 Unconfirmed by Activision at this point, the Nuketown map is allegedly a remake of the popular map, and is called NukeTown 2025. The image above was spotted at a retailer in Ireland, and is listed as “Our Most Popular Map, Re-imagined for the future,” Treyarch is also calling this “The Biggest Incentive in Call of Duty History”.

What retailers are going to be participating in this mysterious pre-order content is unknown at this point, but with the cat out of the bag, expect Activision to reveal something shortly.  Call of Duty: Black Ops II is due out this November.  If you’re unfamiliar with the close quarters combat of Nuketown, here’s a sample of an epic killstreak in progress on the map.