The latest news in the world of video games at Attack of the Fanboy
March 10th, 2010 by William Schwartz 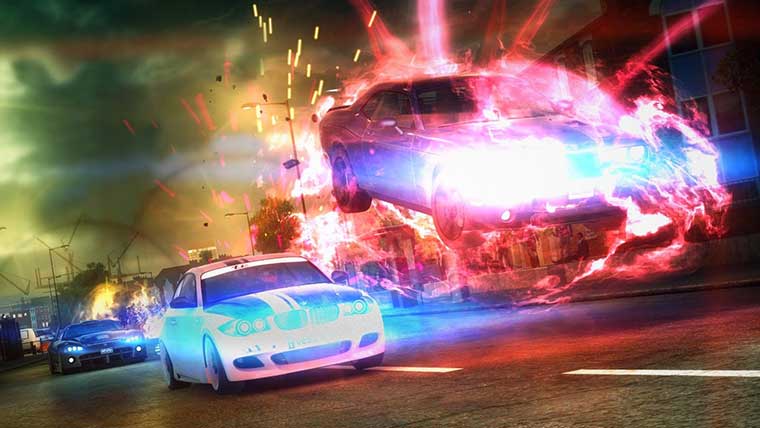 Ok, so you got your beta code. First part complete, next part learn how to play.  Powerups are an integral part of the game to any driver in Blur.  This guide breaks down all of the powerups and the hidden tactics for each of them. You’ll be a Blur pro in no time!

“The Shunt is a forward firing weapon.  It is large, deliberate, and commanding .Don’t let it’s quickness put you off taking advantage of the Shunt though – it also has homing abilities! The best Blur players will use Shunt’s weaknesses to their advantage, and hone in with amazing precision on their opponents.

But what if you’re already in the lead? Don’t Worry –  Shunt can be fired behind you as well.  Hold down on the thumbstick as you fire. Though be sure to line up your shot ahead of time! The Shunt loses it’s homing ability when fired backwards.”

“When fired this Power up unleashes an energy burst around your vehicle, disabling  anyone unfortunate enough to be caught in the way.  The most professional drivers in Blur will keep the Barge in one of their two reserve slots until the time is right.  Use the cycle power up button to save Barge, and unleash it when you’re heading into a crowded hairpin corner.  Barge can also defend against Shunts, Bolts, and Mines, when activated at the right time.”

“One of the most versaitile power-ups in Blur, the Mine can be used in many situations.  Drop a mine on the track to lay a trap for racers behind you, or use your rear view mirror to line yourself up with trailing opponents.  When they’re right on your back bumper, unleash a mine to spin them out. If you hold up on the thumbsticks when dropping the Mine it will fire forward.
Snipe racers in front of you. Block Attacks behind you!

Stuck at the back of the pack? If so, then Shock might come in handy. Using this Power-up launches three deadly balls of energy at whoever is in 1st place! The energy balls remain on-track for a few seconds, providing a dangerous obstacle for those out in front.Practice your steering! Skillful drivers can weave through the shock domes without taking damage… If you’re in first, use a Shock in combination with a Shield to wreck havoc on the crowd behind you.

Does what it says on the tin. The Nitro unleashes a blast of speed which, when used correctly, could propell your car right to the front of the pack!
That’s not all though. Holding down on the thumbstick whilst firing the Nitro will activate an air-brake, temporarily slowing you down to a crawl. Whilst in this slowed state your steering is enhanced, allowing you to point your car in the right direction before the super boost kicks in! Blur experts will use the air-brake in hairpins, negating the need to brake manually on approach.

Bolt is a triple skill shot. Picking up this Power-up gives you THREE super high-speed projectiles to fire. Either tap the button three times in quick succession to unleash all Bolts at an unsuspecting opponent, or save them for defence against incoming Power-ups. Bolts are also great at finishing off opponents with low health!
It takes two Bolts to destroy a Mine. You can also use two Bolts to destroy a Shunt – just hold back on your thumbstick to shoot them backwards.

If you know your stuff, you’ll always have a Shield saved in one of your reserve Power-up Slots. Activating this power-up makes your car impervious to damage for a short amount of time. It doesn’t last forever, so make sure you use it at exactly the right moment!

Quickly switching to your Shield and activating it before that Shunt homes in on you is one of Blur’s more advanced tactics. Quick fingers will be rewarded! Shields can also be upgrading by using mods – i.e. get more health when you are hit, or absorb your Power-ups…

What do you do when your car is damaged and about to blow? Ask any veteran Blur driver, and they’ll tell you to take it easy and head for the nearest Repair. The more skilled drivers will keep a repair in their reserve slots, just in case they hit tough times.
Of course it’s not the end of the world if your car does go boom – you’ll respawn on track a-ok. It will lose you some time though, so it’s a good idea to keep a Repair Power-up on hand just in case. Keep an eye out for your car health (in your rear view mirror), smoke, and panel damage to see if you’re in need.