Borderlands: The Pre-Sequel Video Walkthough Narrated By The Developer 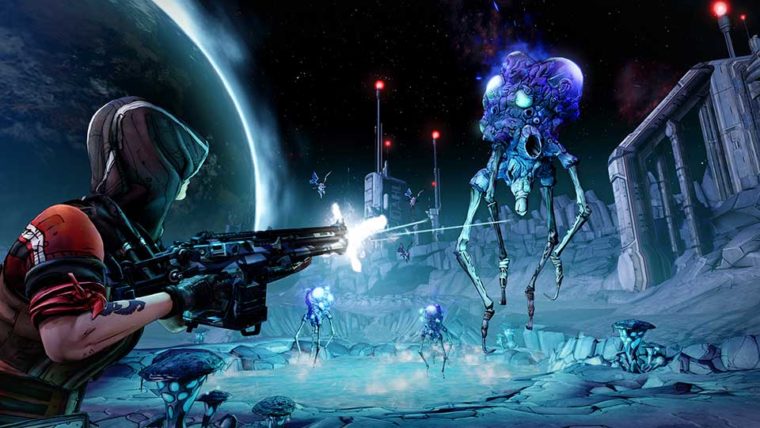 2K and Gearbox have taken their E3 2014 walkthough of Borderlands: The Pre-Sequel and thrown it online for all to see. They have also added in a bonus with the game’s developers narrating the entire experience, sharing interesting facts about the game and explaining some of the newer elements. Borderlands: The Pre-Sequel takes place between the original Borderlands and Borderlands 2, showing how the characters ended up where they were at the beginning of the second game.

The mission in the video takes place on a low gravity moon. Due to being in a no-oxygen environment, air is a major concern for the player and the enemies. Limiting your oxygen usage will factor into how you tackle the mission. Playing as Wilhelm, one of Handsome Jack’s henchmen, the player is searching for a military AI. To do this you’ll have to shoot and loot your way through tons of enemies.

The lower gravity of the environment changes up the gameplay significantly. The player is able to jump extremely high, leading to different paths and combat tactics. One part had the player open up a new path across the map, but instead of having to walk all the way back to the ground he was simply able to leap over a barrier and continue on his way. The problem with this is that the enemies can use these tactics as well. During the playthrough there were multiple enemies using jetpacks to gain altitude, causing some major problems for the player.

Before the mission starts you get a look at the character customization screen, where you can choose different abilities and items to help you complete the mission. With Wilhelm, you can swap out entire limbs, eventually leading to him becoming the more robotic version of himself encountered in Borderlands 2.

Borderlands: The Pre-Sequel will be released on October 14th for PC, Xbox 360, and PS3. The developers have hinted that PS4, and Xbox One versions are a possibility though.