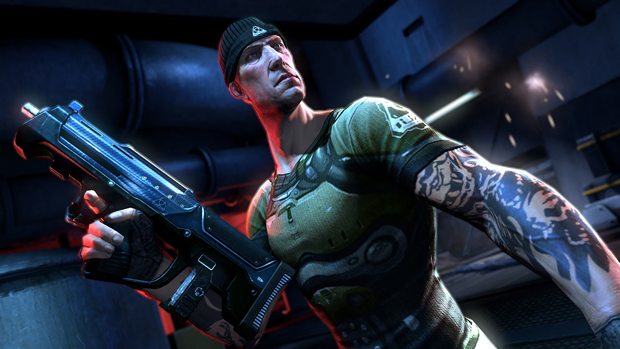 The details of the first DLC for the parkour-style FPS, Brink, have recently been revealed.  The pack, titled “Agents of Change”, will bring new maps, abilities, character customization options and weapon attachments while also raising the level cap to 24. Here’s a full list of the DLC content:

New Maps
Founders’ Tower – The revolution finally reaches the island’s iconic spire and takes the battle for the Ark to dizzying heights.
Labs – Venture into the depths of the Ark’s original research and development laboratories, a submerged high-tech facility so far untouched by the civil war.

New Player Abilities
UAV – This stealthy and lethal device allows Operatives to automatically mark nearby enemies on their radar. For more explosive fun, they can even take direct control of the UAV and detonate it near unsuspecting foes.
Napalm Grenade – Soldiers can use this new grenade to cover an area in a sea of deadly flames.
Pyro Mine – Engineers can plant these mines and leave enemies in the epicenter of a massive napalm explosion.
Field Regen Unit – Medics can deploy these units to increase the health regeneration of any nearby teammates.
Tactical Scanner – This universal ability allows players to reveal the active buffs of their opponents, allowing them to pick off enemies more strategically.

New Character Outfits
The Sad Punk – Add a touch of Steampunk to your Resistance character.
The Limey – Bring order to the Ark with this outfit inspired by traditional European police.