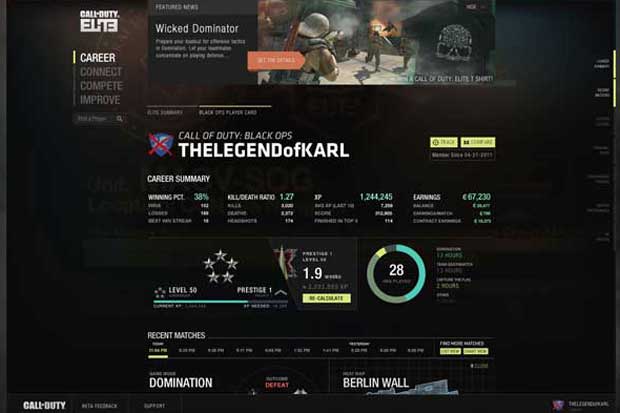 Jesse Divnich of EEDAR has made a forecast for the upcoming add-on for the Call of Duty series.  In it, he projects that the Call of Duty: Elite service will reach 1.5 million subscribers by the end of the year.  Divnich who also expects the premium service to reach between 2 and 4 million within the first 12 months, believes that a solid review score for Modern Warfare 3 will play a huge role in how many people subscribe to the service.

In a recent interview the analyst postulates:

“In terms of the services potential, our current surveys and market research indicate that Call of Duty: Elite could achieve 10 to 20% penetration among Call of Duty: Modern Warfare 3 purchasers,” he said.

“It is critical, however, that CoD MW3 achieves critical acclaim as the bulk of subscribers are likely to come from the core gaming community, where review scores can have incredible influence. While this wouldn’t have been a factor in prior years, as CoD has faced little competition, the release of Battlefield 3 could prove to be a thorn in CoD’s side.”

From what we’ve seen so far, Call of Duty: Elite looks great.  It looks like the incredible and meticulous stat-tracking that Call of Duty fans likely crave.  As with all things its going to be a balance.  Gamers never like to have to come out of pocket for things that they believe “should have been included in a game”  but if the service offers content that is above and beyond what they’ve come to expect from a Call of Duty title they’ll gauge the value by their own measures.  As it stands, a Call of Duty game provides months and months of entertainment if you are one of the millions that play on a nightly basis.  If they don’t take that core feature away, which Activision has made staunchly clear that they aren’t, I think that alot of players that play this game religiously are going to have a hard time passing up the enhanced functionalities.  Especially if it’s as reasonably priced as the service is rumored to be.