Koreans Unhappy With Who’s Leading Them In Civilization 6 As tensions between North Korea and the United States continue to escalate, it’s nice to see that Korea made headlines for something a bit more light-hearted yesterday: their inclusion in the upcoming Rise & Fall expansion for Civilization 6. It seemed like good news all around considering how they turned out Civ V, but it turns out there is one party somewhat upset about it: Korea.

Or rather, Korean gamers.

It would be a bit inaccurate to say they’re upset about their inclusion overall, however, as they’re mostly upset about who’s leading the Civilization 6 Korean faction: Queen Seondeok. Apparently, Koreans really dislike Queen Seondeok and yesterday’s trailer seems to reflect that sentiment. Compared to the Western version on Youtube which has 3k likes and 621 dislikes, the international version has 272 likes and 447 dislikes.

Personally, as someone who is generally unfamiliar with Korean history, I really have no idea why Queen Seondeok and her inclusion in Civilization 6 would be such a big deal. In fact, it would be easy for someone in my position to write off the upset posters as “man-children” who are upset about female representation (at least one person already did). However, a cursory glance at the comments immediately reveal otherwise.

“Why seondeok… She was not a good leader at all!” One user posted.

“Utterly incompetent miserable ruler,” another stated. “What the hell, Firaxis?”

Another user went so far as to list exactly what she accomplished during her reign:

“Her achievements: Only lose land with never getting, she lose 40 castles. F.O.R.T.H.Y. Despite Silla was stronger than neighboring countries (This causes the Silla is still up to the time of destruction). Never opposed to the opinions of the servants. Do not plan to develop and only cry to hold Chinese pants. Do not know Chinese culture and do bad diplomatic manners. Never communicate positively with the other Korean nations of Baekje and Goguryeo before korean unification (Despite their positive attitude). Build too expensive temples by raising gold from all over the country (She never care about the people). Provide the fire of war to neighboring country by naming the rooms of temple as name of city in neighboring country. Even though the country was in ruins, she had luxury. People uprise against her tyranny and she trembled without anything idea. Dying in the hands of rebel, helping the next queen to come to the throne.”

Based on the phrasing (and actual language) in many of the complaints, most of them were written by Koreans who take issue with her inclusion based solely on her merit.

The bashing doesn’t end there, however, as many also took issue with the way she is portrayed by an American developer. Here’s a comparison between how she is depicted in Korea (left) vs how she’s depicted in the game (right): 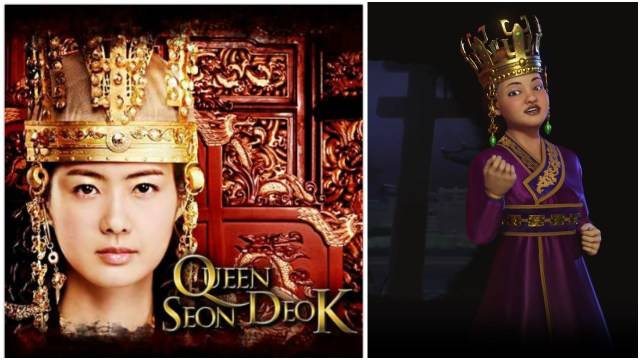 “Ugh she doesn’t look Korean at all,” one user stated. “Im not gonna buy your game. Thanks for saving my money.”

“She doesn’t even look Korean,” another chimed.

For what it’s worth, Queen Seondeok doesn’t appear to be a total failure like some would make her out to be. According to “Silla Korea and the Silk Road: Golden Age, Golden Threads,” she did have some achievements such as building the oldest existing observatory in Asia and founding Buddhist monasteries like Punhwang Temple. Furthermore, she’s at least famous enough to have an entire TV series made about her life. That said, based on criticisms from various posters, she doesn’t appear to be entirely worthy of inclusion either.

And if that’s the case, then why was she included at all? Surely, Firaxis had to be somewhat aware of how Korea views one of their leaders if the game is aiming for some historical accuracy. And, as it turns out, there’s a theory about that: it was done to meet a quota.

“So this is how leaders are selected for Civ games these days?” One user questioned. “To please feminists who don’t even buy/play the game? I had a hunch that many of other leader selections were bullshit, but out of all potential great Korean leaders you give us a woman who has zero achievements and is only know for ruining everything she touched?

Obviously, you aren’t going to please everyone in a game like Civilization 6, but you know you messed up when you are pissing off the very people someone is supposed to represent.