The latest news in the world of video games at Attack of the Fanboy
June 4th, 2010 by William Schwartz 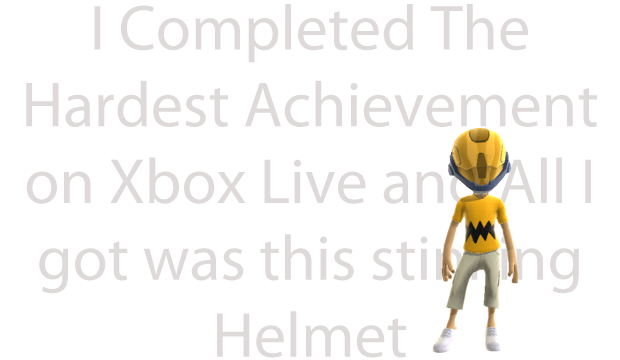 Avatar Awards, since their inception last year not many developers have taken advantage of what could be a pretty cool rewards system on the Xbox 360. Sure there have been some developers who have adopted the system and rewarded players that take the time to perform pretty meaningless tasks. Left 4 Dead 2 is a good example they rewarded players with shirts and props that you could earn by finishing specific tasks within the game. Recently, Blur and Red Dead Redemption have incorporated the Avatar Awards system into their games. Though, there hasn’t been too much challenge involved in earning these items for your avatar.

November 2009, Halo Waypoint is a free program released for Xbox Live. Avatar awards are revealed and they are sparse. Opening Waypoint for the first time will earn you one, a 343 guilty spark. Guilty Spark could be the most popular of the awards since it’s free, and you don’t have to do anything to earn it. I dare you to browse 20 gamer pictures on Xbox Live and you’ll likely find someone getting cute with their guilty spark in their picture. Not content with my free robotic buddy I began a quest. Knowing that I love hunting down achievements I wanted to go after the big daddy. The Halo Waypoint EVA helmet Avatar Award, a reward so rare it is only seen on the truest of the true blue Halo players. Only problem is I wasn’t one of those guys. I have never been a huge Halo fan, but the lure of this rare prize drew me in like a moth to a flame. Little did I know that this challenge would take me seven months to complete. I have spent time grinding on a game for achievements before, games that I hated, games that were beyond bad, and my modest 50k achievement points dictate that I’m somewhere between avid gamer and obsessed with performing excruciatingly boring tasks.

In all honesty, I thought this would take a weekend. I thought how hard could they make this challenge. Well it turns out the challenge spans over every Halo game for the 360. Halo 3, Halo ODST, and Halo Wars. In Halo Waypoint you earn Career Milestones as you earn achievements across the various Halo titles. Starting at level 1 you will work your way to level 50 much like a Halo game. The EVA helmet, can be had by merely collecting 3900 achievement points across the three Halo titles. That’s when the math got a little fuzzy, this means that to get this what I now call “stinking helmet”, I need to complete every single achievement across all the Halo games. Ugghhh I sighed. Up for the challenge at that point, I actually started out pretty strongly. I owned all the games, and even had a few of the easier achievements like those for the single player modes in the game and felt that the others “wouldn’t be that bad”. Needless to say seven months later I have a quite a different perspective on the experience. Though the journey took me deep into the underbelly of the Halo universe I grew to both appreciate the games that I was playing and despise some of the players that play them.

RTS is more my speed so I started out with Halo Wars. Now, I say I wasn’t one of those guys. But, I do like the Halo series. I just don’t appreciate years of the multiplayer experience that Halo 2 & 3 have given so many users pleasure for. I have read the books, and enjoy the campaigns. The Halo Wars campaign was fun and in my opinion one of the best console RTS’s of all time. Simplistic controls and fast battles make for a pretty fun experience in Halo Wars. But I was staring down the barrel of needing to get all of the achievements and for this game it included not only perfecting the single player portion of the game but attaining General status in the multiplayer component. Not only would there be a learning curve, I would be behind it for almost 8 months already. The sportsmanship that you hear so much of in Halo titles, is alive and well in Halo Wars. This meant for the first two weeks of learning the ropes I was brute rushed, arbiter rushed, warthog rushed every tactic that I now know as dirty was applied and used on me. Though the leveling took painstakingly long to happen 4 months of intermittent playing netted me my general status in multiplayer and secured one of the more difficult achievements in that title. The others were a matter accomplishing tasks that varied in difficulty but none that took that level of commitment.

Knowing that Halo 3 was gonna be the largest chunk of this 3900 points I really dreaded having to pop this title back in my Xbox 360. I wasn’t a fan to start out with and scanning the achievements quickly showed me that many of these were gonna need to be done in the multiplayer part of the game. This meant going online with screaming idiots and while many might label them as “retarded” we’ll just go with excitable. I had already found all the single player secrets their were to find in Halo 3 but was now tasked with becoming “good” at Halo. I was gonna need to pull off what I consider amazing feats, considering that in most of my previous Halo multiplayer endeavors I ranked at or near the bottom every time I played. I don’t consider myself bad at games in general, I just never took the time to learn Halo really well. Well, now I had my opportunity. In the process I learned what most people rave about in Halo. It’s an extremely solid experience, barring the graphics of the game I now consider to be better than most. Though it’s still not one that I find myself going back to when in need of a quick fix. I definitely gained both a greater respect for Bungie as a developer and gained some skill in the popular title. Though it didn’t come with no cost. It meant no more Modern Warfare 2, no more Battlefield BC2, it meant giving up on two games that I waited months for, for what, this “stinking helmet”. There was plenty of frustration in Halo 3. First, since the game was one that I considered “old” I was playing with hundreds of thousands of die-hards that have been playing the game for years.

Seeing the end in sight I felt like I was running downhill when I popped in ODST to being my victory lap. Then I examined my achievements and realized that I basically had to do everything over again and that even my single player would need to be restarted to attain all 1000 of the points here. Yes, I didn’t know Virgil was good on my first playthrough and I poked him with a needler every chance I got on my first play through. Alas, single player was only the start of troubles on ODST. The true pain began when I remembered that Bungie left out public matchmaking in ODST. Friendless, because who really wants to play a 6 month old game in the best year of gaming ever, I took to internet forums and message boards to find others that were hunting down all of the achievements for ODST. I managed to find three kind souls to help me with the CO-OP campaign. Though, for Firefight I was on my own. I figured hell it’s only 8 maps how hard can it can be to grab 200,000 points by myself. Well it turns out it’s pretty damn tough. Even with cranking the settings down to easy it took marathon sessions of Firefight that lasted upwards of four hours each, if I was lucky enough to make it that far, to barely net me the required points to get my measly 10 Gamerscore points.

And in the end, all I got was this “stinking helmet”.  But it’s my stinking Helmet, and for gamers that are always on the lookout for new achievements and things to spice up their gaming lives its a challenge. Sure it’s pretty much useless the helmet and all, but if you’ve got the stones it’s an especially rewarding personal journey to undertake. For me, taking on this challenge is one of the accomplishments that I will always remember when I look back at my hobby.   That or I’ll just look back at it and say ” What a waste of time”.