The latest news in the world of video games at Attack of the Fanboy
June 22nd, 2017 by Dylan Siegler 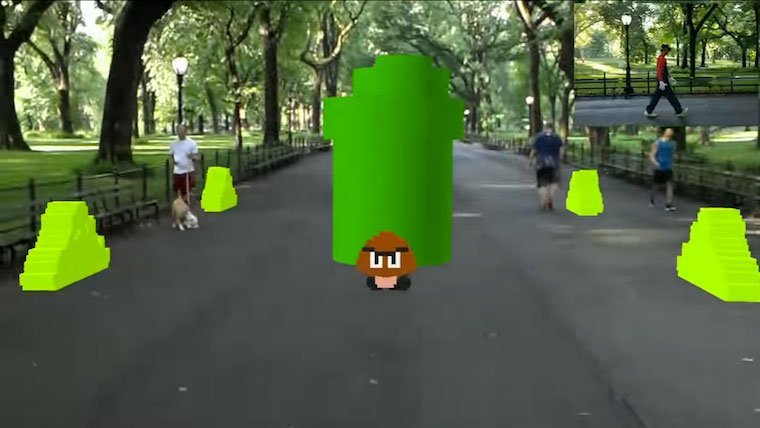 An amateur game designer, Abhishek Singh, recently uploaded a video to YouTube that shows him playing an augmented reality Mario game he created. Singh dressed as Mario and took to Central Park in New York City to play the game, which requires a lot of space. After giving a brief introduction, in which Singh introduces himself and explains the game, he starts playing.

The game is a life-sized recreation of Super Mario Bros.‘s World 1-1. 8-bit hills, blocks and enemies appeared in Central Park on a largely 2D plane. The game looked pretty cool and even acted fairly functionally. The enemies died when Singh jumped on them, blocks released items when he jumped up and punched them and he received points when he was able to catch a mushroom. He was even able to shoot fireballs after getting the Fire Flower.

Despite how cool the game looked and how cool the idea of an augmented reality Mario game is, it also became evident that a longer version of the game would be impractical. For one thing, real humans simply can’t jump as high as Mario. In the video, Singh often walked off of the 2D plane of the level to get around obstacles like pipes and blocks that he could not have jumped over. Also, Singh was unable to jump onto any platforms for two reasons: 1. again, he can’t jump that high, and 2. the platforms don’t really exist. Even if he could jump that high, he would just fall through the augmented reality platforms and back onto the real ground. Kind of defeats the purpose of a platforming game.

Aside from the jumping limitations, there’s also just the fact that Mario levels are long. In the video, Singh had to go to a large public space, Central Park, so that he could play the game. There’s no way someone could have that much straight walkway in their house or apartment, so the game kind of forces you to play in a large, open, public area. But this also causes problems. Singh’s view is often obstructed by blocks, hills and enemies. He could have easily walked into someone or something. Luckily he didn’t, but mass public use of this game would seem to be too dangerous.

I don’t know if Singh plans on releasing this game to the public at all or if he was just demonstrating his abilities as a game designer. Either way, the prospect of an augmented reality Mario game is really cool and if it could be done more practically, it’s something I’m sure many Mario fans would be excited about.