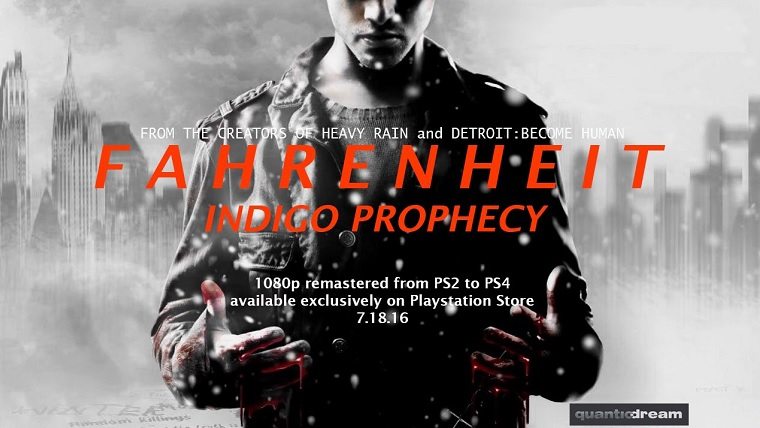 David Cage fans are in for a treat, as it has just been announced that one of his earliest and most critically-acclaimed games will be coming to PlayStation 4. The game is none other than Fahrenheit: Indigo Prophecy, which has been remastered from the PlayStation 2 version and will launch on July 17th for $15.

Developer Quantic Dream had previously remastered Heavy Rain and Beyond: Two Souls earlier this year, though both of those games were PlayStation 3 games that already looked really good. It will be interesting to see how much they are able to touch up the PlayStation 2 game’s graphics.

It also remains to be seen if there will be anything additional added the game, or if it will just be a straight remastered port. While this was mostly the case with Heavy Rain, Beyond: Two Souls actually had a new feature that allowed people to play the game’s narrative in chronological order.

Quantic Dream’s next game is called Detroit: Become Human, which had some new gameplay shown off at this year’s E3. One of the game’s characters is Kara, who is an android that has escaped the factory that she was created in. The other is Connor, whose job it is to hunt down those who are like Kara. Of course, your decisions in the game will impact the fates of these characters and the outcome of the story.

Detroit: Become Human does not have a release date, though it is currently in development exclusively for PlayStation 4.