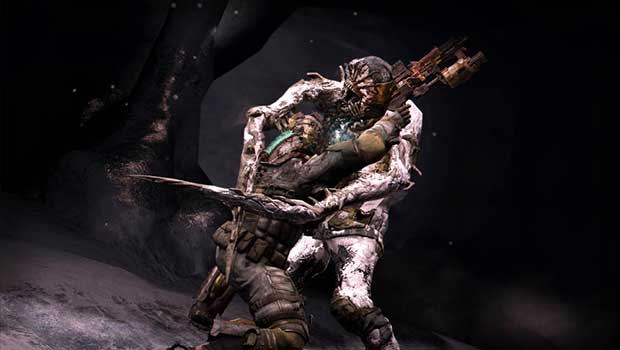 Dead Space 3 on the Xbox 360 will be the first cooperative game to feature the voice command features of the Kinect Motion controller on the console.  According to a press release from EA, these voice commands will work whether the player is playing alone or with a friend in the game’s drop-in drop-out cooperative mode.

Steve Papoutsis of Visceral Games had this to say about the integration:

“Dead Space 3 delivers the action horror experience our fans have come to know and love.  And with the ability to survive the adventure alone, with a friend, or with Kinect, we’re excited about extending the Dead Space experience to a whole new audience of players.”

For the latest screenshots and footage from the cooperative mode, check out the latest media from Visceral, below.

REDWOOD CITY, Calif.–(BUSINESS WIRE)–Find partner! Fire stasis! Attack Enemy! Visceral Games, an Electronic Arts Inc. (NASDAQ: EA) studio, today announced that the first big blockbuster launch of 2013, Dead Space™ 3, will be available exclusively on Kinect™ for the Xbox 360® video game and entertainment system from Microsoft. The all-new Kinect functionality further immerses players into the Dead Space universe by allowing players to use simple voice commands to help a friend from the onslaught of horrors and thrills that awaits them in this spine-tingling new adventure. Dead Space 3 featuring Kinect will make it easier for co-op partners to give each other health or ammo, find objectives, revive one another and more when the game launches February 5, 2013.

“The voice commands in Dead Space 3 give players a unique way to take down the terror, whether they choose to face the Necromorphs alone in single-player, or alongside a friend with drop-in / drop-out co-op,” said Steve Papoutsis, Executive Producer on Dead Space 3 and VP, General Manager of Visceral Games. “Dead Space 3 delivers the action-horror experience our fans have come to know and love. And with the ability to survive the adventure alone, with a friend, or with Kinect, we’re excited about extending the spine-tingling Dead Space experience to a whole new audience of players.”

Winner of more than 15 critic awards at E3 2012 including Best of Show from Game Informer Magazine,Dead Space 3 cuts to the heart of deep space terror. The game is recognized by game critics worldwide for its incredible craftsmanship in horror, action, suspense and sound design. Players will embark on a thrilling ride through space that takes them to a hostile new planet, Tau Volantis. Fortunately, they are not alone this time around. The fully integrated drop-in/drop-out co-op feature gives players the option to play alone or team-up with a friend anytime. Players that choose to take down the terror together will experience additional story details, side missions and gameplay mechanics only found when playing as John Carver.

Dead Space 3 will be available on February 5, 2013 in North America and February 8, 2013 in Europe for the PlayStation®3 computer entertainment system, Xbox 360 and the PC.

For additional information and news, please visit www.deadspace.com, follow us on Twitter at:www.twitter.com/deadspace, or become a fan on Facebook at www.facebook.com/deadspace. Media assets are available at http://info.ea.com.