The latest news in the world of video games at Attack of the Fanboy
April 23rd, 2013 by William Schwartz 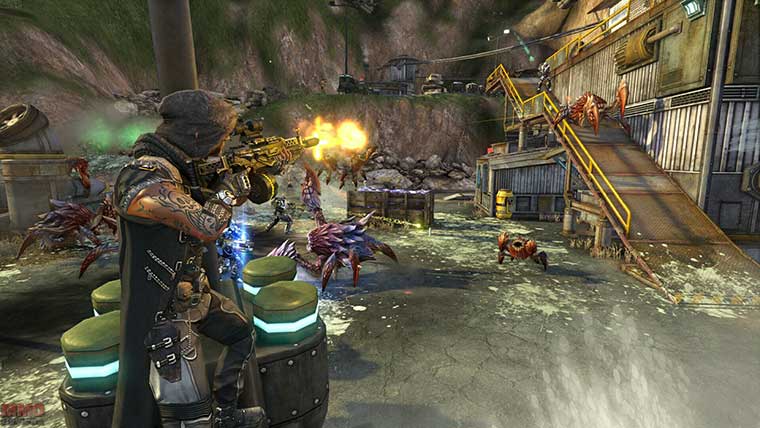 Defiance has been out for a couple of weeks now, and the MMO third person shooter from Trion is showing a lot of promise in my opinion. With the TV series running alongside we have seen various characters cross over as advertised, although the full extent is not yet known – to me at least. This has included a series of missions specifically dealing with elements of the show and it’s characters, although if you haven’t already started playing it, these have gone now.

Despite some seemingly inevitable teething problems with launching a game like Defiance over 3 platforms, Trion were very quick to both apologise to it’s budding new community and institute two large patches. They’ve fixed some problems and even added boosts across the board that can normally only be purchased as extras through the Defiance Store. This is the heart of their RMT (real money trading) or micro transaction business, and these quick fixes have been seen as a gesture of goodwill. With their RMT in mind it is refreshing to see that there are no specific weapons or vehicles that can -as of yet- be purchased, meaning all the weapons in game have been acquired through honest luck and hard work. You won’t get annihilated in PVP fighting against someone with more money to spend on the game than you. With this in mind, and being free to play, you can get by in Defiance easily without having to spend a single penny more than you have already spent on the title itself. This is a blessing given the tighter belts of gamers in the current economic climate, something most game developers these days seem to refuse to accept outright.

It is this blind refusal that is seeing the decline of game purchases. Speaking from the UK which houses millions of avid gamers, the industry is in even worse shape. In fact, the largest games retailer (GAME/ Gamestation) is facing difficulties paying their suppliers, and have occasionally been getting the newest titles in late, as well as having to close many of their stores across the country. Over the last few years the UK has seen unemployment skyrocket and average wages have fallen year on year in real terms since the recession first bit these shores. This, naturally, means consumers have less money to spend on games and are even less likely to be able to afford shelling out a further £20/ £30 on top of the title for all the DLC’s and micro transactions. A practice that has been putting gamers at a serious deficit, and in many cases deterring them from some purchases. 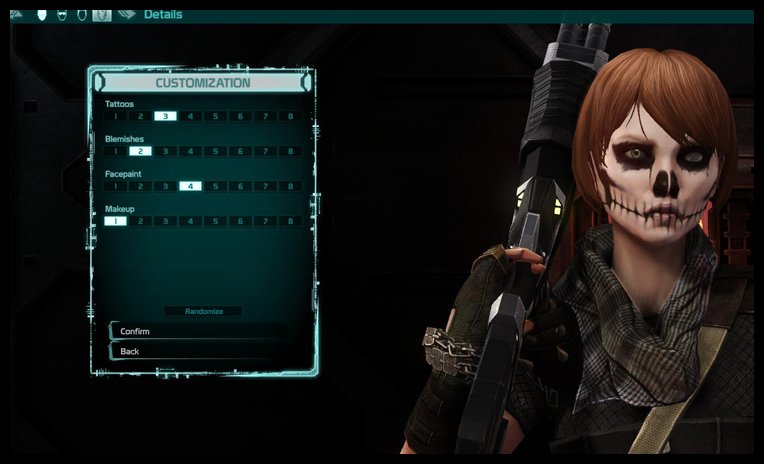 Defiance is good for both casual and serious gamers, with a bunch of well thought out content

When news broke of EA’s decision to include micro-transactions in all their future titles I personally know many previously loyal fans had to sit back, and consider supporting a company that doesn’t have their best interests at heart. It’s sad when a company is trying to price out it’s own customer bases across the globe of buying their titles. The outcry and aftermath should have been enough for them to realise people simply can’t handle the extra costs, and serve as a warning going forward. Instead, we’ve seen EA double-down. Time will tell on this stance I guess, but I wouldn’t be surprised if someone’s greed puts them out of business before long, when the community reaches the point of ‘no more’ and reacts.

Defiance is good for both casual and serious gamers. It has well thought out missions designs that do not take up massive amounts of time to complete, nor will it waste your time by sending you halfway across the map on a fool’s errand. When you take a mission, your objective can usually be found within 500 metres of it’s start point. Although some of the main missions occasionally required travelling slightly further. Getting around is easy enough, you can drive around freely on quad bikes, in cars or trucks. Each has an advantage and disadvantage, depending on your style. There are plenty of weapons types to get to grips with, as well as various abilities to experiment with on different enemy types, as well as various mods that can be attached to improve their effectiveness.

The point is, that there’s a lot going on Defiance. Even if you only have an hour to spare to you can party up with hundreds of other players who are all looking to collect the valuable Arkfall that drops frequently across the map. Like other MMOs, these drops offer a decent amount of XP, equipment and keycodes essential for obtaining ‘lockboxes’ that contain random items. Aside from the distraction from the main missions, the side missions and random encounters have a genuine purpose. Aside from the rewards on offer in many cases they also offer you ‘reputation points’ that allow you access to faction vendors which sell valuable weapons at a discount that would otherwise be difficult to come by in game. This encourages players to fully explore everything that Deficance has to offer. You can also take on challenge’s that come in the form of time trial races, and two different combat style challenge missions. There is also a PVP mode and co-op missions available. 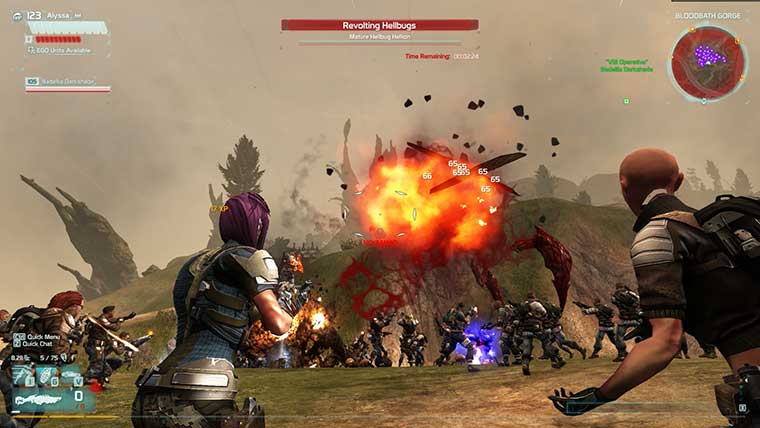 There’s a lot of great content in Defiance, though nothing is perfect of course

There’s a lot of great content in Defiance, though nothing is perfect of course. And while most of Defiance’s faults, especially with the gameplay are fixable, and I’m sure will be in time. For me personally, the first place Defiance falls down in general is the distinct lack of information on offer, we have to save the trees of course so you no longer get full manuals with most games; and Defiance is a game that needs one, especially if you are a novice to the MMO/RPG platform. The tutorial missions give you a brief and basic overview of the combat system and EGO system but all support pretty much drops off there. In the menu wheel you can select the ‘intel’ screens, but again the information is extremely limited. E.g. if you were to open the menu and select ‘mods’ it simply tells you that mods can be attached to guns, but does not explain how you can do this or that to unlock mod slots on guns you need to use the weapon to level it up, which in turn opens up the mod slots. Basics like this can lead to some needless confusion I think.

In combat there are also occasions where you find yourself firing from cover and hitting the object in front of you despite having a clear line of sight. Likewise enemy fire in some areas will come straight through any cover you can find, but these are the types of teething issues and bugs that can be addressed in later patches as they are reported to Trion; Which has an easy enough in-game system for reporting problems and giving feedback through it’s wheel menu.

Being an MMO, Defiance is, by it’s nature a social game that allows you to interact and talk to nearby players. While catering this to the console is no doubt a difficult task, it can at times be tricky as you are dealing with other, real people from around the world. The last thing you want when running into an enemy position is to have your audio suddenly be taken over by a loud wash of static or screaming children. You can either try to persevere or risk getting shot whilst you muddle through the chat options to mute them, which are easy to mess us up when you’re in a hurry. This, of course, is the inevitable risk of playing any game online that allows audio chat.

If you can get past these minor annoyances then you should have no problem playing Defiance which is showing some real promise for the future with my hope that follow up games or updated versions for the next generation consoles will be forthcoming. I am very excited about the future of Defiance and sincerely hope that Trion continues to engage with it’s fans as pulling off a cross platform MMO that will prove to become another large and long lived franchise to the gaming world, it is certainly a breath of fresh air!