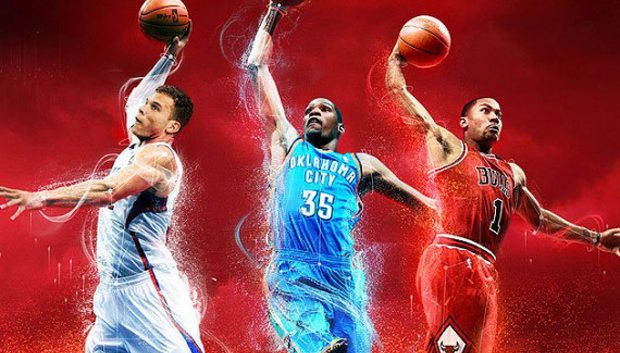 This year 2K Sports will return to using present NBA stars to sell their annual basketball simulator. Derrick Rose, Blake Griffin, and Kevin Durant will all find their way to the game’s cover come October when NBA 2K13 releases.

“In their young but impressive careers, Rose, Durant and Griffin have each taken the NBA by storm. All three are past winners of the NBA Rookie of the Year award, and have also amassed eight All-Star berths, three scoring titles, and one Most Valuable Player award between them.”

“There are many young superstars in today’s NBA, but we’ve selected three incredible athletes for the cover of NBA 2K13 that represent the NBA well,” concluded Jason Argent, vice president of marketing for 2K Sports. “It’s clear to us that Blake, Derrick and Kevin are the most deserving guys to inherit the NBA 2K cover from Jordan, Magic and Bird.”

NBA 2K13 will arrive on October 2nd, 2012 in North America. Pre-Order customers will get the NBA All-Star Content Package as a pre-order bonus on day one.