The latest news in the world of video games at Attack of the Fanboy
December 2nd, 2014 by Kyle Hanson 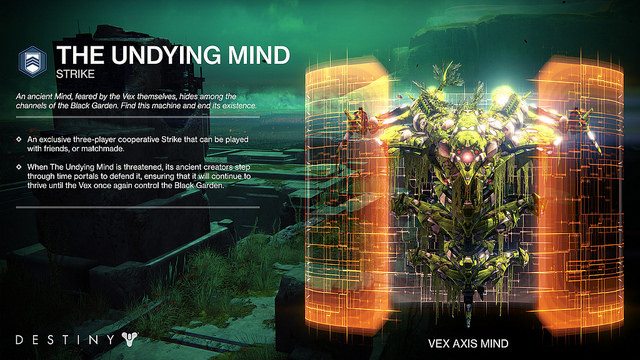 Destiny is all set to launch its first big expansion with The Dark Below. Packed with additional content for players to enjoy, the expansion will have a few exclusive items for PlayStation owners, whether they game on PS3 or PS4. However, while PlayStation owners will be getting this content first, it won’t always be exclusive. As with all of the other content that was given as part of this deal, the content might become available for Xbox at some point after Fall 2015. Take a look at the full breakdown below:

First up, another exclusive Strike to face on Mars: The Undying Mind.* You can step back into the coveted dangers of The Black Garden to face a timeless Vex machine-beast that has survived for ages. Prepare for firefights amidst vine-laden pillars and decaying paths in an effort to destroy the ancient evil.

And if you need more firepower to match your new foes, look no further than the PlayStation-exclusive exotic weapon coming to The Dark Below, The 4th Horseman shotgun.* Four barrels, five shots, and a sizzlingly fast fire rate will eat away at the Vex legions in short order.

This is all added on top of the content already offered by Destiny: The Dark Below, which includes: