The latest news in the world of video games at Attack of the Fanboy
September 21st, 2015 by William Schwartz 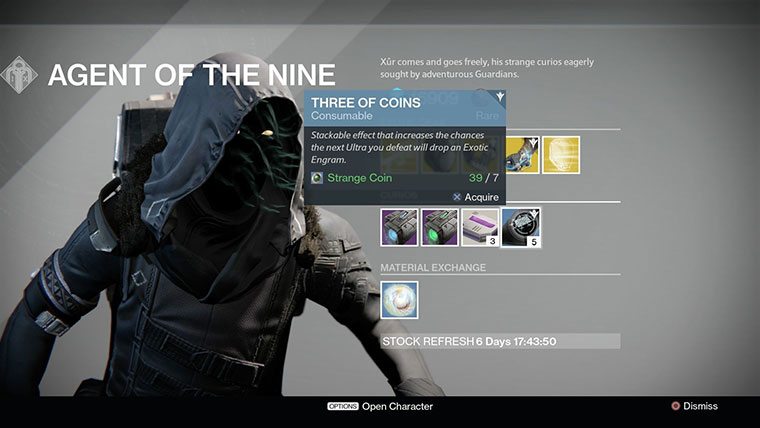 Update:  Bungie has indeed issued a hotfix that has effectively done away with this Exotic Engram glitch.  Each Three of Coins now provides a smaller increase to the drop rates of Exotic Engrams when used one after the other.  The Three of Coins now functions probably more closely to what Bungie’s initial intentions where, like for defeating Strike Mission Ultras.

With the launch of Destiny:  The Taken King, Xur’s first visit during the new expansion introduced a brand new item that Guardians can use to increase the drop rate for exotic engrams when killing Ultra enemies.  Naturally, the Destiny community discovered how to farm exotic engrams in Destiny.

Like the loot caves that were discovered last year during Destiny’s original launch, this new exploit was awarding Destiny players with many, many new exotic weapons and armor for doing relatively little in game.  This naturally has caused some controversy within the Destiny community as there are some Destiny players who believe that an exploit like this ruins the game.  This exotic engram glitch has recently been addressed by Bungie and very well may be patched shortly.

Deej, the Community Manager for Destiny says that the development team is already discussing how they will nerf Three of Coins:

“I was just conferring with the Design Team about how Three of Coins is performing in the wild. It is their assessment, and yours as well, given the context of the dialogue here, that the drop rates are too damn high. For now, this will play in your favor…  You earned those coins. Have fun spending them. The Nine may be delighted that you’re blowing them all now.  As always, thanks for being an outstanding source of feedback and awareness. We like you just fine,” reads a post by Deej on Reddit.

There are many ways that Bungie could nerf the new item, and they haven’t exactly shown their hand when it comes to what action they’re going to take.