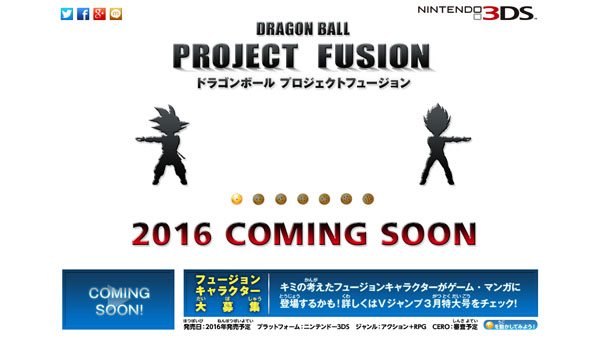 Some new information has been revealed for the Nintendo 3DS exclusive Dragon Ball: Project Fusion.

As reported by Kanzenshuu.com, the latest issue of V-Jump magazine in Japan revealed some interesting new information about Dragon Ball: Project Fusion. The story of the game is unlike any other that has featured in the Dragon Ball franchise before.

Much like Xenoverse, it sounds like you create your own character at the start. You will then join another character named “Pinijji” but the game world is different. The world is fused together from different places and timelines from the Dragon Ball series. The main story is to find out how this weird fusion between worlds came to be in the first place.

Not only have the worlds changed, by you will also run into many fused characters on your journey. The scan in the magazine showed fusions between Videl and Pan, Trunks and Vegeta, Piccolo and Krillin, Hercule and Buu plus Tien and Yamcha.

The biggest fusion is between Goku and Broly and the magazine says they are more powerful than Vegito. You can also recruit allies in your journey and the main character can fuse with Pinijji.

Dragon Ball: Project Fusion will be released in 2016 for the Nintendo 3DS console.