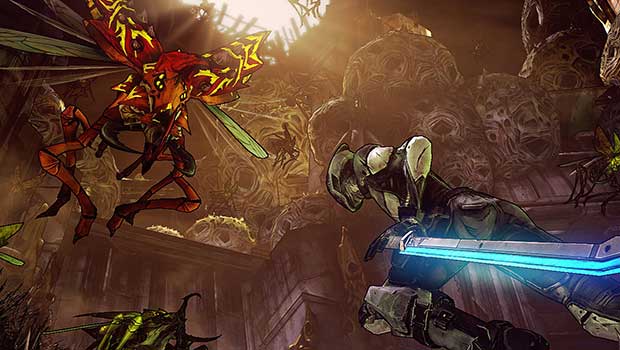 Borderlands 2 has already seen the release of a substantial amount of downloadable content, but Vault Hunters patiently awaiting Sir Hammerlock’s Big Game Hunt have just received word on the next bit of DLC. One Redditor has uncovered a description for the upcoming Borderlands 2 content, and it reads:

“Danger! Excitement! Mustaches! It’s time for another episode of Vault Hunter Adventures, featuring Sir Hammerlock! In this week’s tale, our hard-boiled heroes travel to the savage continent of Aegrus! Their goal? To uncover the most exotic creatures Pandora has to offer, and give ’em the old one-two!”

An exotic new continent of Aegrus? Yes please. The new area is said to be a “swamp/jungle” area, and will consist of five main story missions and twelve side missions. No release date has been given or official details about this content released by Gearbox as of yet.

Further details were revealed over on the Borderlands 2 sub-reddit.

– One new head and one new skin for each class
– A new vehicle – the fanboat (summoned from a Catch-A-Boat station), with 68 of its own skins and corrosive, incendiary, and shock weapon mods
– Currently 12 side missions and 5 longer main story missions
– A new raid boss (“Imagine, if you will, a Stalker the size of a small building. Now imagine yourself killing it.”)
– More new Seraph items
– New kinds of enemies, like the borok and the scaylion
– Lots of monster-tracking side missions assigned by Sir Hammerlock
– A new swamp/jungle continent named Aegrus
– A self-important but not-so-well-known new enemy who is “super-pumped we’re archenemies now”, and who leads a tribe of jungle savages and has an evil plan that might actually work
– A new treasure room brimming with goodies… but with a time limit