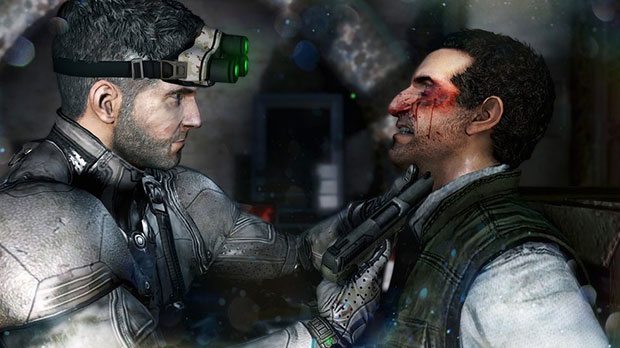 Since its reveal at E3 2012, Splinter Cell fans have had their fair share of questions surrounding Splinter Cell: Blacklist. A franchise that is deeply rooted in the stealth genre, took a bit of a detour in 2010’s Splinter Cell: Conviction, leaving many fans to wonder which direction Blacklist would be heading.

According to Ubisoft’s Zach Cooper, that answer isn’t quite straight forward. Playing as Sam Fisher, Splinter Cell: Blacklist players will have multiple ways to tackle any given situation they are thrown into.

On the subject of non-lethal takedowns, Cooper explains that approaching an enemy will give you a number of options. “If you’re approaching a guy, and you’re looking to take him out in close quarters combat, if you have your knife equipped, needless to say, that bad guy is going to meet their maker. If you do not have your knife equipped, you’re going to experience one of the many incapacitating moves. Chokes, chops, bends, twists, breaks… you get the idea.”

As usual, detection in Splinter Cell has always been a core gameplay feature. Remaining undetected by your enemies is still one of your primary goals. Claiming that you’ll be “rewarded handsomely” for taking out enemies while undetected, Cooper didn’t reveal entirely what this meant for the economy of the game, but did say it was one area where players would be rewarded for using effective stealth tactics.

Last month, Ubisoft briefly explained the three play styles that they would be catering to in Splinter Cell: Black List: The Ghost, The Action Hero, and The Panther.

The full Q&A session can be found on Ubisoft’s YouTube Channel.