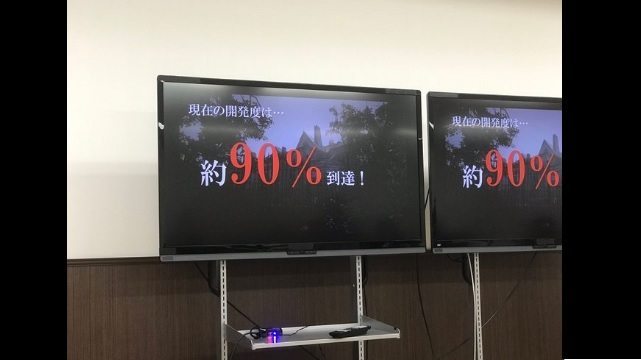 Fans will be happy to know that development for Resident Evil 7 is near to complete. This is a good sign that the game won’t get delayed.

Capcom recently held an Ambassador meeting in order to talk about how Resident Evil 7 is progressing. Blogger, Alex Aniel, attended the meeting and reported on what was said on Twitter.

As you can see from one of the photos he took, the game is 90 percent complete. The release date is January 24th, 2017 so at this rate the game will be finished soon. You don’t have to worry about any last minute delays. We’ve seen this with other games such as Final Fantasy XV and The Last Guardian just to name a few.

Elsewhere in the meeting, Aniel said that the PS4 Pro version of the game looks amazing. Sadly, he wasn’t able to take any photos of it.

Lastly, he got to play a recent demo of the game. He wasn’t allowed to reveal anything specific though. He just said: “Played a new #RE7 demo; can’t talk about what was in it specifically. But it was pretty darn good. Loving the game’s focus and direction. I think traditional RE fans, RE4-era RE fans & even Chronicles fans will find things in #RE7 that cater to what they liked about each style.”

Resident Evil 7 releases on January 24th, 2017 for the PC, PS4 and Xbox One. For PS4 owners, you can play the game from beginning to end using PlayStation VR if you have one.