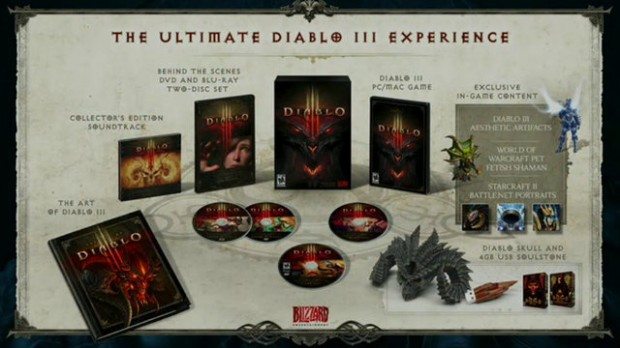 What better way to kick off Blizz-Con 2011 than to showcase a fully packed limited edition of the year’s most highly anticipated action RPG? Announcing that said game will be free for players subscribed to the World of Warcraft annual pass. That’s how.

In addition to getting access to Diablo III immediately as it launches, you will also get guaranteed access to the next World of Warcraft expansion beta when it goes live as well as Tyrael’s Charger mount for free. That should be big news to some of you considering there are those who would have paid out the a** for it anyway. The annual pass can also be paid for monthly and it is now available on the WoW site.

In regard to what you’ll be getting with the limited edition bundle, the game will come with a behind-the-scenes DVD, a copy of Diablo 2 stored on a USB drive which comes with a custom, skull shaped holder. Customary to the LE standard these days, you’ll also be getting a game soundtrack, exclusive in-game content (including a WoW “pet fetish” Shaman, sounds kinky) and a concept art book.