Disc Jam Could be the Next Rocket League – PAX West 2016 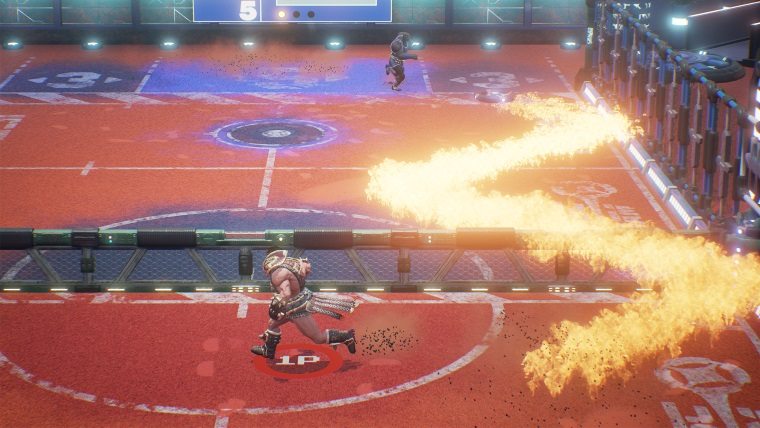 I have a confession to make. Before Rocket League came out I thought that it was gonna be terrible, and largely ignored by the gaming community. I hadn’t played the game, but I’d heard about it via random emails and other correspondence, and I simply ignored most of it, because it looked like a silly game that wasn’t going to get very far. About an hour into playing the game I immediately saw my mistake and rectified it by playing it nonstop and talking about it with everyone who would listen for months afterward. Now I want to continue my recumpence by recommending what could be the next Rocket League: Disc Jam.

The game has already been making waves, winning fan choice awards at E3 events, and garnering some high praise from the few people who have been able to play it. Still, coming from a tiny, two man team, the game is getting far less coverage and attention than it deserves.

Disc Jam fits right in with Rocket League in the vein of sportsish style video games. Two to four players face off as part of two teams, catching and tossing a disc across a tennis net. Walls keep the disc from flying off the side, and the goal is to either get the disc to hit the ground, or have it fly past your opponent and into the awaiting goal. Simple stuff, but devilishly difficult to master, and chock full of little touches that make it play great.

You can lob the disc up high, if you think your angle is good enough, you can curve the disc, or toss it into the side for ricochets, or a strategic line. On defense, players can move around at a pretty fast pace, or they can slide. Passing was just introduced for the PAX West build, and while I didn’t get the hang of it in my short demo, I did pull off a pretty great play by passing to my teammate once…on accident.

Another change since E3 is that points are now always shifting. A counter in the middle of the net is always ticking higher, showing players how much they can earn by getting that perfect throw.The first team to 50 points wins, and points per match can go as high as about 15 from what I saw, so those longer volleys really get tense, as you realize how close to victory your opponents would be if you fail.

Like Rocket League, Disc Jam hides its depth, allowing players to pick it up quickly, and have fun while doing it. Underneath that simplicity though is a ton of intricate mechanics, such as charging throws, or knowing the right time to toss the disc. There’s a  lot to the game, much of which I still don’t have a full grasp on. That’s OK though, because I can still just jump in, toss the disc, and have a good time. Sure, eventually there will be pro players who can, and will demolish me without breaking a sweat, but that will just push me to learn more, and become a better player. Which is exactly what has kept Rocket League at the top of my “most played” list for this past year.

Disc Jam is currently in pre-alpha on PC which you can sign up for here.