The latest news in the world of video games at Attack of the Fanboy
August 18th, 2017 by Jose Belmonte 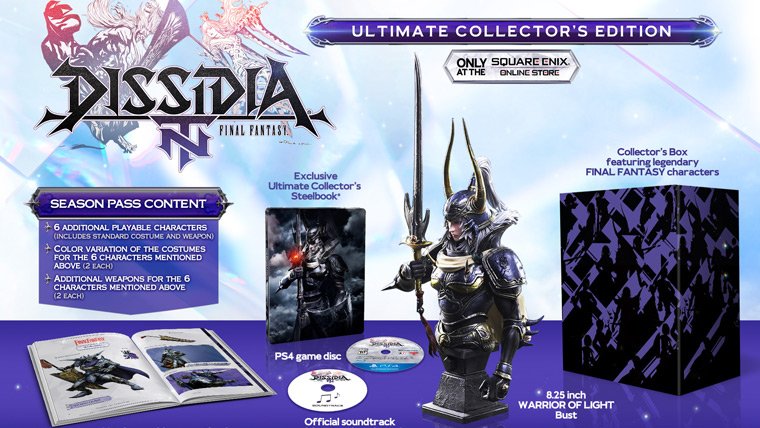 Square Enix has finally put out a release date for Dissidia: Final Fantasy NT. The crossover fighting game is coming exclusively for PS4 on January 11 in Japan, and January 30 in North America and Europe. Additionally, the company has also revealed the multiple editions that will be available at launch, including physical and digital formats. Fans will also be able to purchase a season pass with additional characters, color variations, and new weapons.

In Dissidia: Final Fantasy NT, heroes and villains from all mainline Final Fantasy games are brought together to fight in a war between to deities. Battles are fought in teams of three characters, and they take place in iconic locations from the series like the Lunar Subterrane from Final Fantasy IV.

When the game launches in January fans will be able to purchase four different editions: two disc-based and two digital. The SteelBook Brawler Edition will be available for selective retailers and will grant buyers a copy of the game and a steelbook in one of the three different designs at random. The Ultimate Collector’s Edition features a Warrior of Light bust figure, a selection of 15 tracks from the soundtrack in CD, an art book, a steelbook with a unique design, the Collector’s Box, and access to the season pass.

If you want to try out the game before its release, Square Enix is offering fans to take part in a close beta that will start on August 26. Find out how to sign up here.

Check out this overview of the content for the different editions via press release, and pre-order the game at Square Enix’s website.

UPDATE: The game is also launching on January 30 in Europe.

Customers who pre-order from participating retailers will receive one of three limited edition SteelBook designs at random. Each SteelHook design features a different set of iconic FINAL FANTASY heroes and villains to trade and collect.

Fans interested in a digital-only version can pre-order from the PlayStation®Store to instantly receive a mini-soundtrack featuring five songs plus access to the ‘Nameless Warrior’ character skin for Warrior of Light. The Digital Deluxe Edition also includes the Season Pass.