Opinion: Do we have time for bad games? 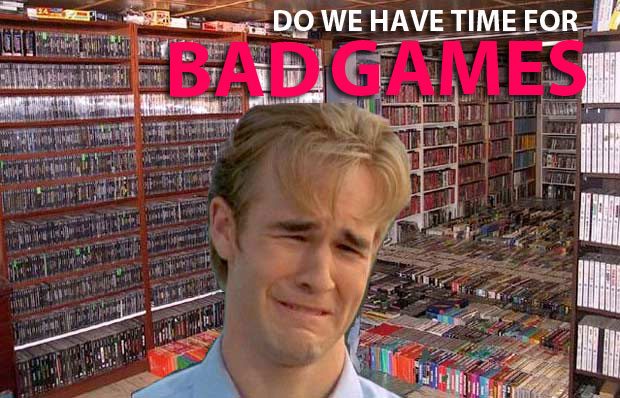 I don’t know about everyone else… but I have games coming out of just about every one of my openings.  Between life, work, a 360, PS3, PC, Wii, and iPhone, I am REALLY behind when it comes to gaming.  How far behind?  I have yet to do more than boot up my copy of GTA IV.  Battlefield 2 has yet to be opened.  I am ALMOST done The Orange Box.  I am 4 missions into StarCraft 2.  I am only a third of the way through Knights of the Old Republic.   Dead Space is dead space on my hard drive. I have not passed the origin part of Dragon Age Origins.  Fallout New Vegas… more like Fallout: Next Year.  And what about the games that are not AAA titles?  How am I supposed to finish a stinker like Army of Two (I got it for 10$) when I only completed Modern Warfare 2 two months ago?  I don’t even own Black Ops.

I partly blame the gaming industry.  There are lots of stinkers out there when it comes to games, but there are also a lot of great games that suck you in and hold your there.  I have 4 playthroughs of Mass Effect 2 (very significant for me as I rarely play a game more than once).  I estimate over 140 fun filled hours were sunk into that game (yes, that is three and a half 40 hour work weeks).  Mass Effect 2 is still my all time favorite game and  after ME2 I experienced a “gaming drought.”  Everything after it was “not ME2.”  I just could not get into other games after ME2… because nothing could compare.  It finally took a reduced copy of Batman: Arkham Asylum to pull me out of my slump/obsession.

Other games have successfully monopolized my time in the last few years: I played the Crysis 2 demo on the 360 for over 20 hours (more than the full game at this point)!  Borderlands sucked me in for easily over 50 hours of gameplay and I am not yet done the DLC.  Fallout 3… easily in the 120+ hours range in one play-through.  I am actually scared to check.  A surprise hit was my 10$  bargain bin find 2K’s NHL 2K9… that one has easily over 60 hours sunk in it (until my season save was corrupted…#%[email protected]).   I shiver to think how many hours were sunk into both the Forza and Gran Turismo series to date.  Lets just not go there.

So how do the small titles compete with the time sucking Mass Effects, Fallouts and Call of Duties of the world?  Target markets, that is how.  But for guys like me, I have begun to skip any game that is either not “my target market” or that gets mediocre reviews.  Yes I play games but not reviews… but these days I just don’t have the time to play a game long enough to find out it is a stinker.  And guess what?  If a game doesn’t grab me at it’s onset, or if it is obviously broken at release (Fallout: New Vegas), it gets the shelf.  How shallow is that?  I assure you that I do it out a necessity, not choice.  I am sure I have passed up a few great games as a result (I will get to them eventually… I swear).  The thing is, I just don’t care, and I can do it because I have more great games in a stack that are just waiting to be opened and enjoyed.  Left 4 Dead anyone?

I am no COD fanboy, but I now understand why games like COD are so popular.  Point and shoot.  Easy, fun, fast, short, move on.  Pick it up, drop it 5 minutes later and repeat.  I stopped Bioshock half way through and took a 2 month rest before finishing it because it was too long.  Dead Space remains unfinished for the same reason.  The games I love, I play a lot, get the achievements/trophies, buy the DLC, and buy the sequel on day 1.  Good games I finish once and move on.  Mediocre games, or games that do not quickly grab me, gather dust.

I am sure I am not alone here in my gaming habits.  Most of us have a few favorites that we all buy on day one and pump huge amounts of time into… a few more games that we pick up on the cheap, play and move on, and then the ones we ignore.

Using the saturated shooter market as an example, what becomes of the Army of Two’s, Homefronts, Brink’s and SOCOM 4’s in the world of massively popular Halo and COD?  The answer is that they do well enough, but they are a mere flash in the pan.  Play and trade at best for most of us, IF we even bother in the first place.  My time is too valuable to we wasted on a mediocre game.

I wish I were a fanboy with only one system of choice.  I wish I only liked a limited number of game genres.  Life would be easier then.  There is a good side to my problem however: When I get around to buying most games, I save a lot of money.  I also rarely get burnt for 60$ by over-hyped mediocre games.

I just hope I get to play Elder Scrolls V before VI comes out, as  I have yet to complete IV.  It is times like these when the announced delay of games like Gran Turismo 5, Mass Effect 3 and The Last Guardian make me sigh in relief.

Do you have time for bad games?  I would love to hear your opinions.

Home / Game News / Opinion: Do we have time for bad games?