The latest news in the world of video games at Attack of the Fanboy
October 14th, 2015 by William Schwartz 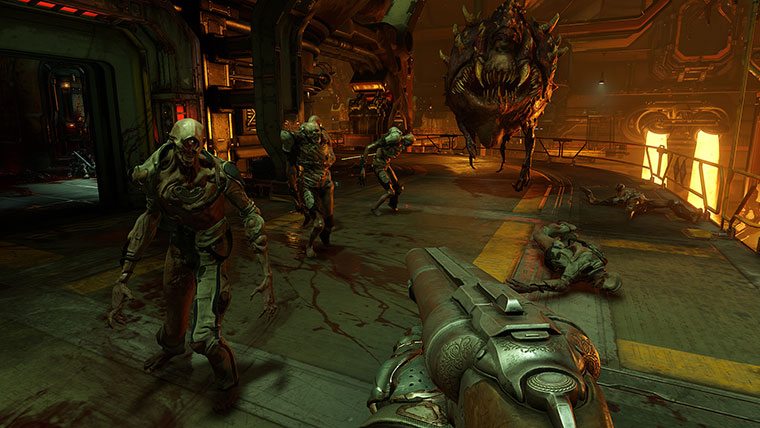 The DOOM website has recently been updated to provide fresh details about an upcoming closed Alpha Test for the shooter.  While there hasn’t been an official date set for the DOOM Closed Alpha Test, its said to be a test period designed to stress the game’s dedicated server infrastructure.  They note that this is not the Beta Test that was offered as a pack-in for those who pre-ordered Wolfenstein: The New Order.

The Closed Alpha for DOOM will also be an English-only test.  If you did pre-order or purchase Wolfenstein: The New Order on or before May 26th, 2014 apparently you will be able to register your code on the DOOM website for possible access to this test.

id & Bethesda have published a full list of what to expect in the beta which can be found below:

The Alpha will feature 1 multiplayer map: Heatwave. This industrial-themed map will place players in an arena setting featuring plenty of armor, ammo, and health pickups. Narrow corridors, walkways and small chambers all link to a central, open area of the map, providing players with a variety of environments that suit varying playstyles, as well as the focus point for fighting over key power-ups.

Welcome to the core of DOOM’s arena-style multiplayer combat. In this mode, two teams of 6 players will try to dominate each other by fighting over the Revenant and Gauss Rifle power-ups, which provide devastating firepower that can turn the tide or ensure victory.

Being the first player to the Demon Rune will transform you into the powerful Revenant. Use your jetpack and dual rocket launchers to hunt down the other team for a limited time to either secure your team’s lead or mount a comeback.

Available as a counter to the Revenant, this high-powered weapon destroys opponents in one blast. Use the alternate fire to see your targets through walls, but be warned, there is a limited number of shots, so use it to take down the demon rather than enemy players. Once you’re out of ammo, you have to wait for it to appear on the map again.

The Closed Alpha will feature a limited arsenal of weapons and items featured in the complete game. They can be used both in standard and customizable loadouts.

DOOM saw its first footage revealed earlier this year at Bethesda’s E3 Presentation.  A short gameplay video was revealed that got fans of the franchise excited about the 2016 release.