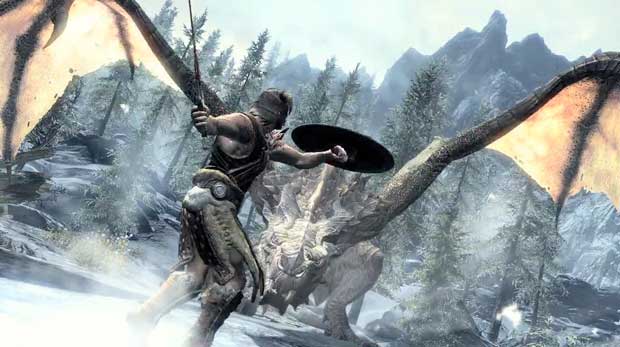 The Elder Scrolls V: Skyrim is basically built around the premise that you must save the land from an onslaught of Dragon attacks, yeilding the power of the scaly beasts to send them back to where they came from.  They’ll swoop in and attack you at a moments notice, and even Todd Howard has gone on the record as saying that the beasts have a mind of their own.

We saw it live at E3, you’ll be walking along likely trying to complete one of the many quests in the game, when suddenly these things will come down to the earth looking for a fight.  Luckily, Bethesda announced that this won’t be happening right off the bat with Elder Scrolls V.  Bruce Nesmith recently went on the record to claim that “Random dragon attacks won’t happen right away”.

“We decide when those random events can happen and how…all of our ‘random’ systems are actually sophisticated decision systems that use randomness as one part of the process…Random dragon attacks won’t happen right away. When they first start, you will have companions with you or be able to use the environment to your advantage, and the dragon will be one of the weaker ones. As the game progresses, you fight tougher dragons and are on your own more often.”

While the dragons looked very impressive in the demo footage that we saw at E3, having these things pestering you while trying to level your character at the onset of the game could be extremely annoying.  Good Thinking Bethesda!