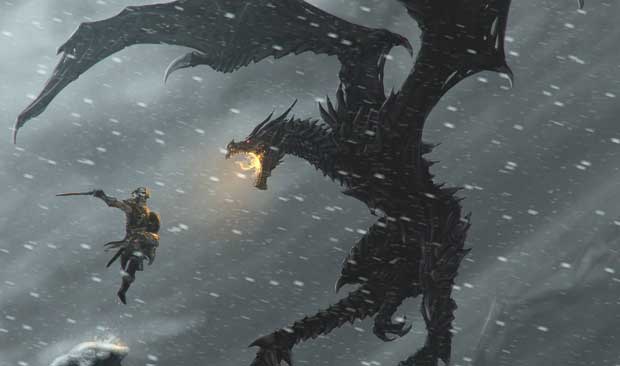 Skyrim Director, Todd Howard, gave the opening keynote address to DICE attendees last night. In it, the developer also showed off an internal Bethesda Game Studios video of the team tinkering with The Elder Scrolls V: Skyrim prior to launch. During the “Game Jam 2011” the developers at BGS were given a week to throw whatever they wanted into the already crowded world of Skyrim.

As you can see from the video below, these inclusions were wide and varied. From new weapons types and uses, new skill trees, and even the fabled flying mount, were discussed at least internally by the studio. Some of these things seen in the video may be coming to the game in the form of future DLC.

Nevertheless, it’s interesting to see some of the cool ideas that were left on the cutting room floor prior to getting the game into the hands of awaiting fans. Even more interesting is the obvious surplus of cool ideas that could be heading to consoles and PC as DLC in the near future.

Bethesda hasn’t yet announced any specifics on the DLC for Skyrim, they’ve been busy pushing out The Creation Kit, which went live a short time ago, and patches for Xbox 360 and PS3 which are going live today.