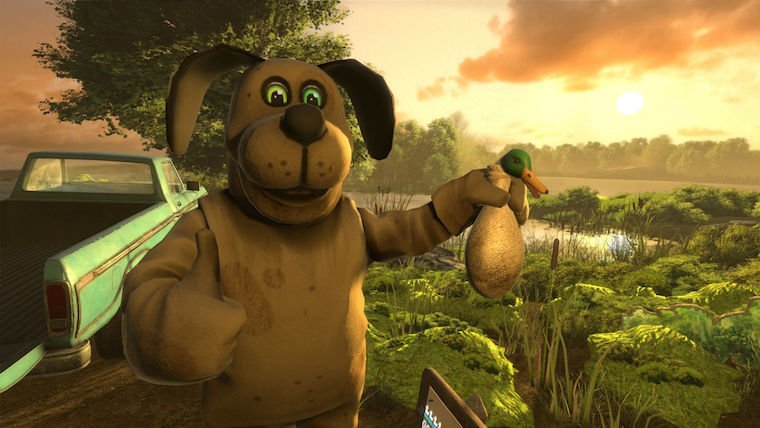 One of the lesser-known announcements at E3 this year was for a new VR game called Duck Season. The world premiere of the game’s gameplay was shown by MatPat and Stephanie from the popular YouTube channels The Game Theorists, The Film Theorists and GTLive, as well as Brandon Laatsch from Stress Level Zero, the developer of the game. According to Laatsch, the gameplay shown was not of a demo or segment, but rather the full, finished game.

The game takes place in 1988 and the player plays as a young boy. The opening cinematic explains that the boy’s mother got him a one-day rental of the new game Duck Season, which is the in-game equivalent of the real-world NES title Duck Hunt. Usually the boy’s mom would only allow him to have two hours of video game time a day, but today he gets to play as much as he wants since he’ll only have the game for one day. The game begins with the player standing in the boy’s living room, facing the TV with his video game console plugged into it. From there, you can play Duck Season or one of seven other mini-games, such as Triple Tiger, a rock-paper-scissors style fighting game. The main game, however, obviously lies within the Duck Season cartridge.

The Duck Season game within Duck Season is played with a virtual reality shotgun accessory for the definitely-not-an-NES the boy owns. The shotgun works the way a real shotgun would, meaning you have to pump it both ways and reload it one shell at a time. During the demonstration, Stephanie played the game first and, almost immediately upon starting the actual game, MatPat suggested, “Shoot the dog!” Stephanie decided not to (at first) and played the game, which is basically an updated, VR version of Duck Hunt. However, after constant berating from MatPat, Stephanie eventually did shoot the dog, at which point Laatsch stated that shooting the dog is the “inciting incident” of the game. “You chose to initiate violence against him, now he is going to initiate violence against you.”

There wasn’t time to get too far into the game during the short demonstration, but Laatsch explained that the game has a day-to-night mechanic and as you continue to play the game all day to make the most use of your one-day rental, it will slowly become nighttime. Once night falls, the dog will come out of the game and seek revenge. Laatsch mentions that the game has seven different endings, depending on whether you shoot the dog or not, among other actions you can choose to take.

The game also contains a subplot you can explore by looking around at the props in the boy’s house. Laatsch refers to this as a “dark coming-of-age story” and points out that no pictures of the boy’s father can be found anywhere in the house. MatPat wonders if the dog is the boy’s father. But that’s just a theory… Anyway, Duck Season will be available for VIVE within the next couple of months.