The latest news in the world of video games at Attack of the Fanboy
May 25th, 2016 by Damian Seeto 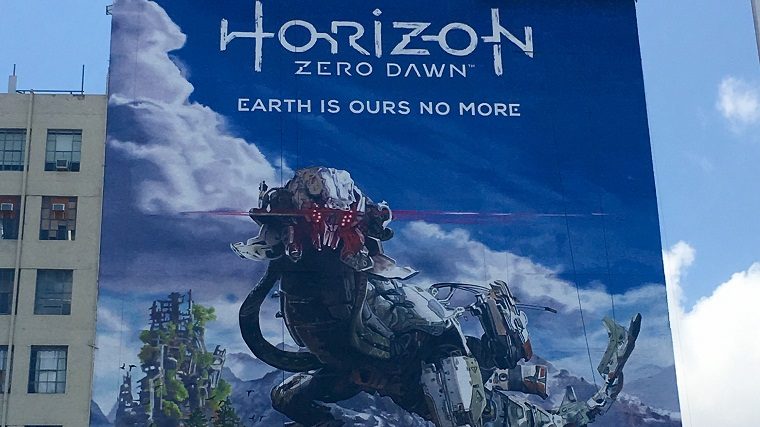 Sony is gearing up for E3 2016 already and it’s safe to say that more gameplay footage from Horizon: Zero Dawn will be shown at the annual gaming event.

Guerrilla Games tweeted the following picture that shows a huge poster of Horizon: Zero Dawn being blasted on a building in Los Angeles. It also has a nice slogan that says “Earth Is Ours No More”. It’s worth mentioning the robot dinosaur has a name as it’s called a “Thunderjaw”.

It’s safe to assume that the game will have a huge part in Sony’s E3 2016 presentation next month. The game’s first gameplay footage was revealed last year and amazed everyone. Some teasers just show cinematics or nothing at all so it was refreshing to a lot of people that this game displayed 7 minutes of actual gameplay footage.

Currently, the game is set to be released exclusively for the PS4 console later this year. There have been rumors that Guerrilla Games needs to delay the release until 2017. A delay can be a good thing as it means the gameplay will be polished and there should be minimal bugs and glitches.