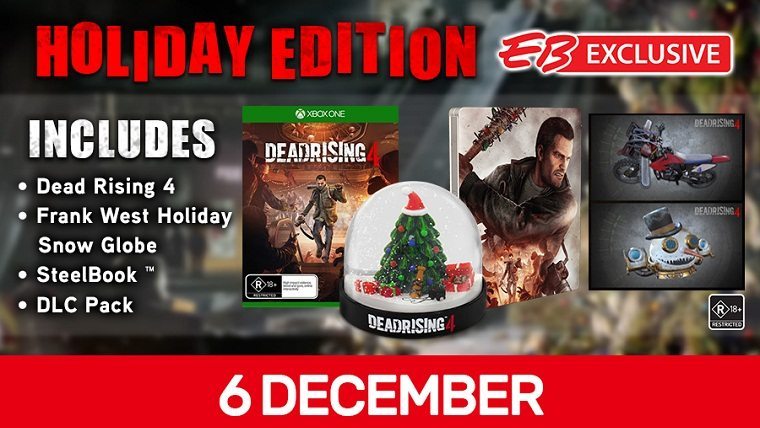 EB Games Australia has revealed an exclusive new special edition for Dead Rising 4. This new bundle is being called the “Holiday Edition” of the game.

The official EB Games Australia Facebook page announced: “Introducing killer EB Exclusive Dead Rising 4 Holiday Edition!” You can order it now if you want to on their official website.

The Holiday Edition of the game includes Dead Rising 4 on Xbox One, Steelbook cover, a Frank West Holiday Snow Guide and a DLC pack that includes the Sliceycle Bike and a Steam Punk Snowman Head.

This edition of the game will be released on December 6th, 2016 and will cost $AUD109.95. This is slightly more expensive than the standard edition which retails for $AUD99.95.

As of this moment, it seems this Holiday Edition of Dead Rising 4 is only available at Australian branches of EB Games. The New Zealand EB Games website didn’t have a listing for it. This is odd since both branches usually offer the same products most other times.

Anyway, Dead Rising 4 is the newest iteration of the popular zombie franchise. In this game, players assume the role of Frank West who was the main star in the very first game.