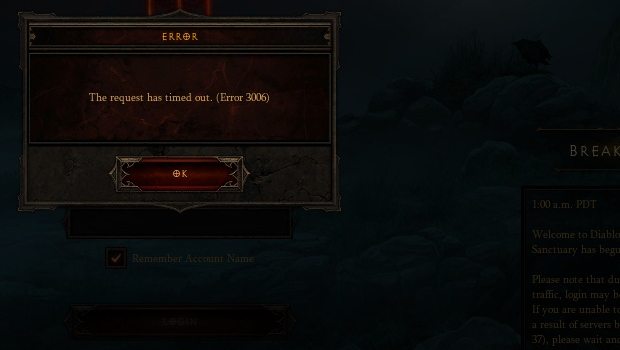 Most of you who have the Diablo III client downloaded and ready to go but cannot connect to the servers due to an unprecedented mass of anxious gamers trying the same thing, are probably under the impression that if you’ve waited 11 years for this game, you can more than likely wait a few more hours. Here’s a tip for those of you still patiently waiting: when you finally begin the fight for Sanctuary, ignore any Templars you come across.

Diablo III players have taken to Blizzard’s forums as well as any platform they can find to air their grievances to report a game breaking bug in the game. It will bring up an Error 3006 message and kick you of the Diablo III servers completely freezing your account in the process.

Apparently, the bug is triggered during an early interaction with a Templar follower. When you begin to trade items with the Templar, you have an opportunity to equip the follower’s shield. Don’t. Doing so will activate the bug and send you into a state of rage that makes Diablo himself look like Justin Beiber.

As of this morning, Blizzard has yet to release a patch, but is in fact aware of the annoyance. Stay tuned for updates on the situation and news of a fix. Ezio had the right idea all along. Templars = Bad.