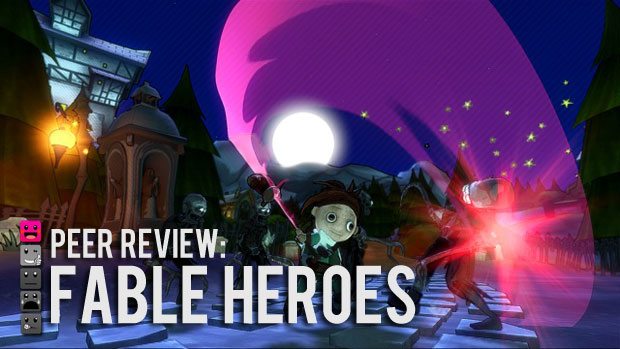 Microsoft’s new take on the Fable franchise is set to arrive later this week on the Xbox Live Marketplace. Fable Heroes is a game where four players play both cooperatively and competitively in a hack-and-slash adventure setting. Working together with your teammates you’ll earn gold coins, which earn unlockable upgrades, characters, and items in both Fable: Heroes and Fable: The Journey which is due out later this year.

It looks like Fable Heroes missed the mark for most reviewers. According to Metacritic, there’s only one outlet that rated the game above an 80 overall, and most scores sound like Fable Heroes is an outright bore. Here’s a selection of the recent reviews for Fable Heroes.

ZTGameDomain – 87/100 – A game with great local and online multiplayer, two versions of the main game and a fun and unique upgrade system, Fable Heroes does a great job of keeping you entertained, whether you are young or old. Just a word to the wise, make sure you play the end credits, the boss battle is awesome.

Strategy Informer – 75/100 – It might not have the longevity of a full action-RPG or the combat depth of the best side-scrolling beat-em-ups, but the balance that Lionhead has struck between accessibility and quick 10-15 minute bursts of fun is hard to resist.

Official Xbox Magazine – 70/100 – The fun lasts only about an hour before the game is over, although the ability to play in Dark Albion (the same Albion, but with tougher enemies and niftier visuals) extends the action. Unfortunately, you just don’t get much for your $10 — and a laggy online experience doesn’t help either. The main reason to play? You’ll be able to transfer gold earned here to your Fable: The Journey character.

IGN – 50/100 – Fable Heroes has a big-deal developer taking a chance on something that should be a sure-fire hit. By putting more Fable heart than good-game soul into its work, however, Lionhead compromised its experiment. The playful visuals hardly compensate for old ideas and mundane action. Hardcore Fable nerds may find something of interest by drudging through the brief campaign. It’s an amusing but empty distraction.

Destructoid – 35/100 – Fable Heroes is a mediocre game at best, largely due to imprecise controls that are exacerbated by its scoring mechanics. If it was even slightly exciting to play, all of its issues could be overlooked in favor of a capability to provide simple cooperative family entertainment. Unfortunately, it is not.