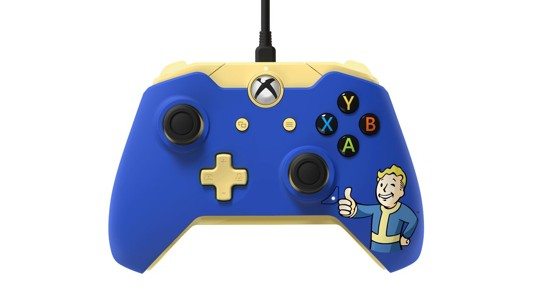 Bethesda has updated its store today with brand new Fallout 4 items in anticipation for the release on November 10th, 2015. Limited edition Vault Boy Xbox One controllers have gone on sale at the store and other retailers for $59.99. Designed by PDP, the controller is compatible with PC and will include a 3.5mm headphone jack that can be tweaked on the controller itself next to the right stick.

The controller will be released alongside Fallout 4 on November 10th, and throughout the week Bethesda will continue to update their store with more items, including a special t-shirt that can be purchased starting now until October 26th. Bethesda will also start stocking their store with 5,000 wired Vault Boy controllers with a blue and yellow color scheme, and a picture of the Vault Boy.

All of the merchandise becoming available looks great, and I’m tempted to buy a Vault boy controller myself. Fallout 4 will release on November 10th, 2015 on Xbox One, PS4, and PC, with mod support coming later to Xbox One and eventually PS4.