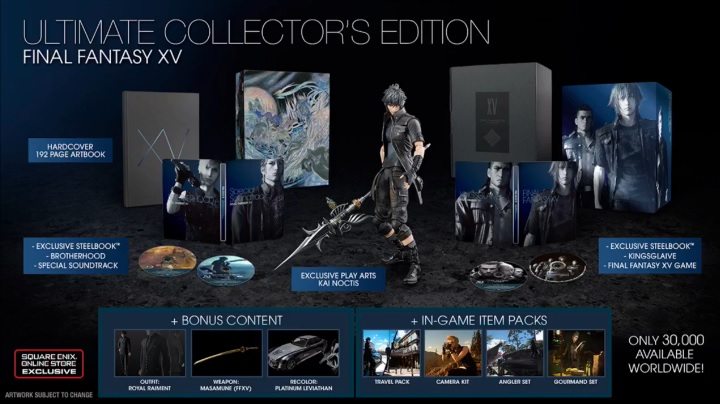 Square Enix has announced a Deluxe and Ultimate Collector’s edition for Final Fantasy XV. Both of them include many extras that won’t be available elsewhere.

The Ultimate Collector’s Edition for Final Fantasy XV is extremely limited because only 30,000 units are available worldwide. You can only get this from the Square Enix online store.

The Deluxe Edition includes: Final Fantasy XV game, Kingsglaive CG movie on Blu-ray, plus the same DLC included in the Ultimate Collector’s Edition. It also comes with a cool looking steel book and should be much cheaper.

Pre-orders for both items will be available at 9pm PST later today. The Square Enix website might be down due to high demand. It’s disappointing the Ultimate Collector’s Edition is only available in one place so don’t get your hopes up if you miss out.

The release date for the game is now official as it will come out on September 30th, 2016 for the PS4 and Xbox One. Sadly, no PC version was announced at the event so it’s console exclusive for now.