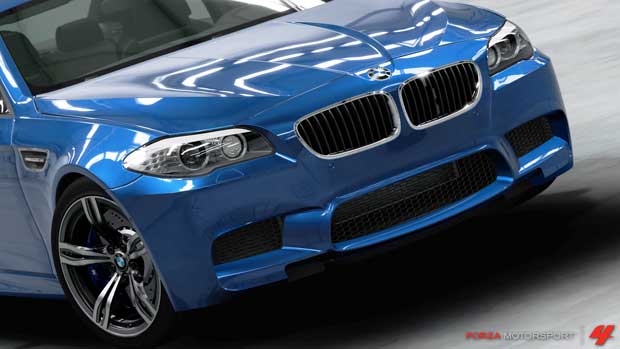 Turn 10, the makers behind the anticipated release of the upcoming racing sim, Forza Motorsport 4, announced today the details of the game’s “Limited Collector’s Edition.” It will reportedly feature an additional 25 cars from exclusive car packs and bonus car offers. Forza 4 players will also be the first in the world to get behind the wheel of the 2012 BMW M5, unveiled recently at the Nürburgring 24 Hour Race in Germany:

Be among the first to take the newly announced 2012 BMW M5 for a test drive before the production car comes out in 2012
The meticulously designed 2012 BMW M5 is the most powerful production sedan ever created by BMW’s M division and will be featured on the cover of the “Forza Motorsport 4” Limited Collector’s Edition. The 2012 BMW M5 will be available as part of the “BMW M5 Fan Pack,” available starting at launch to all “Forza Motorsport 4” owners who download it from Xbox LIVE Marketplace. With the BMW M5, fans will be able to experience Autovista mode, where “Top Gear’s” Jeremy Clarkson takes fans on a virtual tour of the world’s most sought-after cars. In addition, the M5 will be added to fans’ garages and a BMW theme will be available for download on Xbox LIVE Marketplace.

The press release also detailed some of the other souped up cars and additional perks that will be associated with the Limited Collector’s Edition:

Forza 4 is set to hit the raceways this October 14 and those 360 players with a Kinect will be among the first with the opportunity to test the game’s new “Head-Tracking” feature.