The latest news in the world of video games at Attack of the Fanboy
April 1st, 2017 by Jose Belmonte 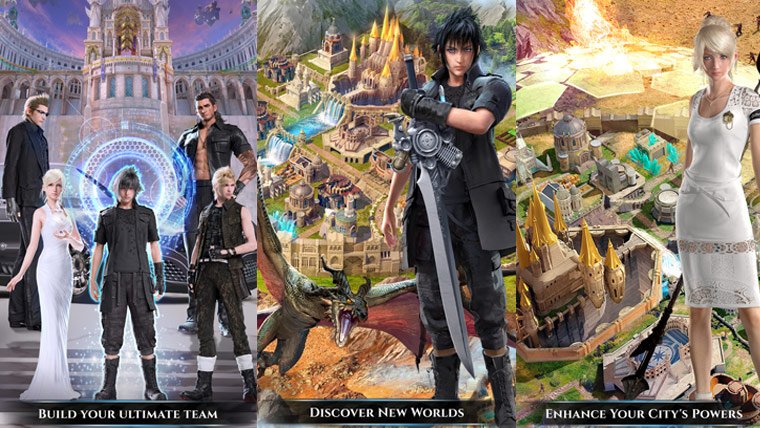 Final Fantasy XV is expanding its brand into unexpected places, like its own strategy multiplayer game for mobile platforms. Final Fantasy XV: A New Empire is developed by Machine Zone, the Western studio responsible for the hit titles Game of War – Fire Age, and Mobile Strike, using the license by Square Enix. The game allows players to take control of the characters of the main title to help building and expanding the cities of the world, in a very similar approach to other browser strategy games.

The game can be downloaded right now from iTunes for free, while a release for Android devices is also expected. The partnership between Machine Zone and Square Enix was announced last year, with the founder and CEO of Machine Zone declaring “It is an honor to work on a franchise I have loved since I was a kid.”

It’s not unusual for successful mobile developers to create new titles taking their biggest hits as a starting point, and using the designs of other big brands. In this case, this Final Fantasy XV spin off will remind us a lot to the experience from Game of War, with players taking care of constructing and improving the buildings of their cities and sending armies to attack other players’ towns.

A New Empire combines the characters, story and soundtrack of the main game in order to create a new experience that seeks to appeal casual players looking into a good alternative to their usual mobile titles, and fans of the franchise who may give this free-to-play game a try. Considering that Machine Zone’s previous releases are among the top 5 highest grossing mobile games of the moment along with Clash of Clans and Candy Crush Saga, it’s easy to see this as an opportunity for Final Fantasy XV to expand its name recognition.

Despite coming out at the end of 2016, nowadays Final Fantasy XV is surrounded by as much as activity as ever, with the main game also getting new features through patches and the first story DLC this week.

Check out the first gameplay footage for Final Fantasy XV: A New Empire.