Gamestop Anticipating Release Of New Consoles Soon; PS4K And Next Xbox One Coming? 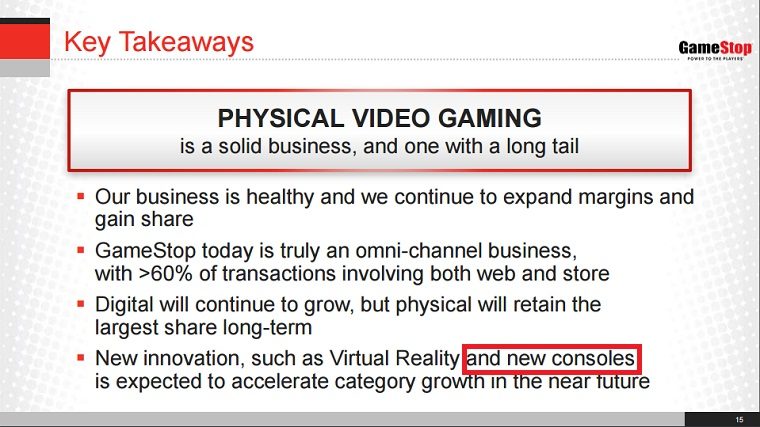 Gamestop held an investors meeting earlier this week and its report suggests that new consoles will be out in the near future. This is further evidence that Sony and Microsoft could be releasing updated versions of the Xbox One and PS4 consoles.

As you can see from its presentation, it notes “new innovation, such as Virtual Reality and new consoles, is expected to accelerate category growth in the near future“. They used a plural on consoles which means there should be more than just the Nintendo NX coming out soon.

As reported by IGN, some recent FCC filings speculates that new Xbox One hardware is due out very soon. Microsoft just told IGN: “We are always looking for ways to improve Xbox One but have no further details to share at this time.” It could be an Xbox One slim since the current console is quite large, or maybe an updated model with better specs.

WCCFTech reported more evidence of new consoles coming out as GameStop COO, Tony Bartel, spoke at the same meeting that he was referring to “multiple launches“. It’s expected Sony will release a PS4K console that will be much more powerful than the current model and is better to use for PlayStation VR video games.

If the Nintendo NX, PS4K and a new Xbox One are released in the near future, it will be a very interesting time for console gaming. It’s not truly a next generational leap, but it could mean more bigger and better games will be coming out.