The latest news in the world of video games at Attack of the Fanboy
April 16th, 2011 by William Schwartz 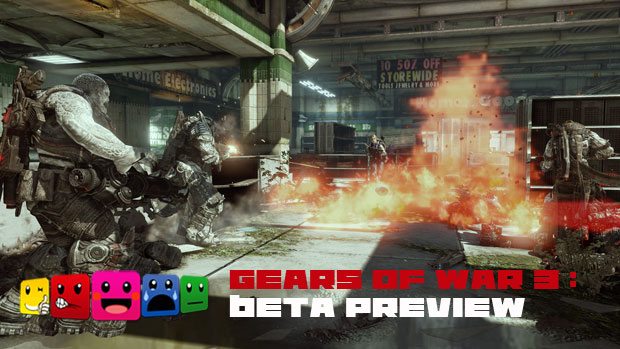 The Gears of War 3 online beta went live this week and we’ve had the opportunity to sink our teeth into the latest from the team at Epic Games.  All of the violent goodness that a Gears title brings will be released next week to those that had enough foresight to buy the Epic Edition of Bulletstorm. The week after, all Xbox Live Gold members will gain access.  So what should you expect when you fire up the Gears of War 3 beta when you get your opportunity?  Quite a lot actually, as we’re about to explain.

Whether you are a Gears fanatic or a new-comer to the series ( I consider myself somewhere in-between) you’re going to be able to enjoy this game right off the bat.  From a gameplay standpoint, this may be Epic’s best work yet for the franchise,  if just for how amazing the game looks.  But looks aren’t everything, and even in this early stage of beta testing, the game is playing incredibly smooth with a much more intense feeling than previous iterations.  There’s a lot of concentrated firefights popping off in what feel like tighter better conceived maps.  From weapons placement to choke points set up, there’s a constant tug of war battle taking place for strategic locations on the beta’s included maps.  Aside from being well designed from a visual and strategic perspective, Epic also incorporated a good deal of interactivity in the maps.  One perfect example that incorporates this interactivity with both graphical flair and strategy, is the sandstorm that arises in Trenches.  This dust storm not only looks amazing, but attempting to make your away across the map only for someone to suddenly appear with a lancer pointed directly at your chest, is a neat experience. 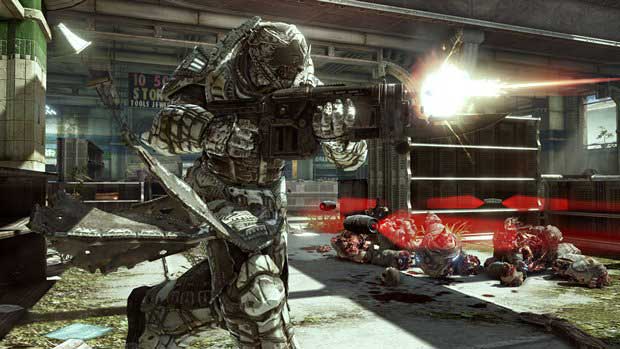 For those that are familiar with the series, you’re going to feel right at home.  The traditional Gears weapons that you have grown accustomed to have returned, as well as some new additions.  You’re still going to have the basic cover mechanics, as well as the revival of the wall-bounce.  There’s really nothing that we saw that screamed huge gameplay change in the core mechanics of Gears 3.  Most of the changes seem to have been tweaks to the structure of the game, and how it is played.  Tweaking map design, and increasing tactics seem to be more front and center in Gears 3, at least more so than drastic gameplay changes.  Since you don’t have to commit weapon pick-ups to memory, thanks to a handy vision mode, there seems to be a funneling of the action to these locations on the map because everyone can see them.   So you can be tied up in a fire fight, plotting your next moves, weapon pick-ups, etc.

One thing you will notice to be much different in Gears of War 3 is the way that Epic chooses to reward your feats on the battlefield, and notify you of them. They’ve included ribbons and medals where you’ll be earning points for nearly every little thing you accomplish in your time with the game.  Reviving downed teammates, specific weapon kills, executions, among many others will net you progress points which will help you in leveling your character.  It’s not just about a number by your name in the lobbies however.  You’ll earn some very cool items that will alter your appearance in the game.  Much like the previous Gears games you’ll be able to select your default character. Starting out, you will be limited to Marcus and Dom.  As you play more matches of different gamemodes, you’ll get the opportunity to use other characters like Anya, Augustus, Baird, and Cole Train.  The Locust also have unlockable characters in the beta, which are earned in the same manner.  Aside from the characters, there are other unlockables to be earned, like medals and paint jobs.  There seems to be ample reasons to accomplish all that you can in the beta, especially since Epic allows you to carry over these earned items into the full game. 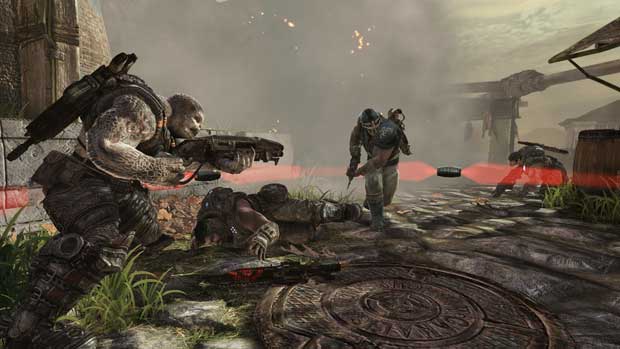 To accomplish it all, you’ll need to be trying your hand at all of the game’s modes which are included in the beta:  Capture the Leader, King of the Hill, and Team Deathmatch.  King of the Hill is fairly straight forward, as a traditional capture point mode, you’ll be tasked with holding down rings throughout the maps which countdown before switching.  It’s fairly standard stuff.  Capture the Leader, again is a familiar game mode for persons that played Gears of War 2.  One person is assigned the leader, and it’s the objective of the other team to take them out.  Team Deathmatch saw the biggest changes with the inclusion of pooled respawns.  Once your team uses up its allotted respawns the game is over.  Basically instead of counting up to pre-determined score, it counts down from your number of remaining respawns as a team, and when the score reaches zero you lose.  So if you tend to die alot be prepared for ridicule.  No matter what style of game you prefer, you’ll be happy with what has been offered up for trial in the beta.

One thing that Epic appears to have gotten right, having been so focused on it, is the matchmaking system.  Out of the gate it is working flawlessly.  Being that there’s only a couple thousand people on it right now, the real stress test will likely occur when the beta opens to more participants.  But as of this time, hopping in and out of matches has never been easier.  Partying up with friends and finding the match of your choice is a quick and painless process packaged in a nice streamlined interface.

Not much has really changed in Gears of War 3, and honestly this is probably for the best.  All of what made Gears of War good in the first place is back. The brutal executions, solid gameplay, stunning graphics,  an honest to goodness matchmaking system, and some gameplay tweaks make it more fun than its ever been.  That’s saying alot considering how fun and well made the first two games were.  The only real complaint I had was that the beta is going to end, and then the long wait to Fall begins.