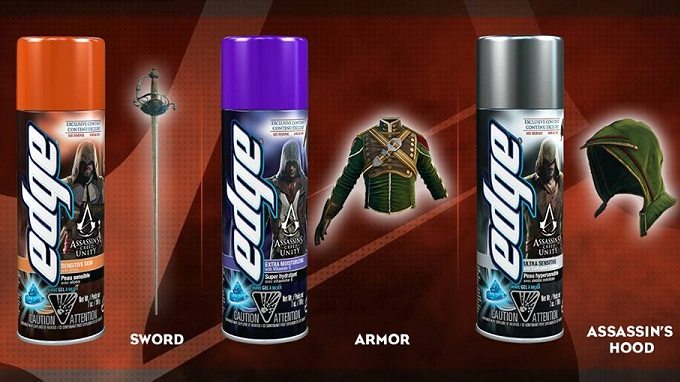 Ubisoft has made some sort of deal with Edge Shaving Gel as you can get exclusive Assassin’s Creed Unity DLC by buying their products.

From the picture that was shown, you get three pieces of different Assassin’s Creed Unity DLC by purchasing three different types of shaving gel that Edge sells.

The orange can includes a sword, the purple can has new armor while the black can has an Assassin’s Hood. All of these minor Assassin’s Creed Unity items are colored green. They didn’t announce if the items make you stronger or more powerful though. If you like the color green, this will be a good deal for you.

This unique Assassin’s Creed Unity DLC deal might be exclusive to only specific countries. Edge shaving gel isn’t exactly available in every country.

Still, this is the weirdest promotion a video game has done in recent memory. DLC is usually included if you pre-order a game, but not if you buy something as unrelated as shaving gel.