The Girls Are Back In Town – Assassin’s Creed: Syndicate Gets A Female Protagonist

The latest news in the world of video games at Attack of the Fanboy
May 11th, 2015 by Emily Speight Ahead of tomorrow’s announcement of a new Assassin’s Creed game, an anonymous source has come forward with information about the new game, titled Assassin’s Creed: Syndicate.

Followers of gaming news will recall last year’s widely mocked PR trainwreck, where Ubisoft claimed that making a female assassin in their first co-op title Assassin’s Creed: Unity would have been too much effort. Since then, we’ve had Shao Jun take the leading role in a smaller game Assassin’s Creed Chronicles: China, reviewed by us. While the game was similarly met with mixed reception elsewhere, it was a definite sign of progress.

According to this source, the latest entry in Ubisoft’s historical stab-’em-up series will feature sibling protagonists. Jacob, a member of the criminal underworld, will get the lion’s share of the screentime; Evie, his equally shady sister, is said to star in about a quarter of the game’s main missions. When not in a mission, players will be able to swap between the two as they explore Ubisoft’s take on Victorian London.

Evie’s concept art was leaked alongside the information, showing her seemingly mid-strut in a series of traditionally masculine outfits. While they’re certainly stylish and easy to move in, they’re not what I would personally choose for blending in during the Victorian era. Hopefully, this is something that will be explored during Assassin’s Creed: Syndicate. 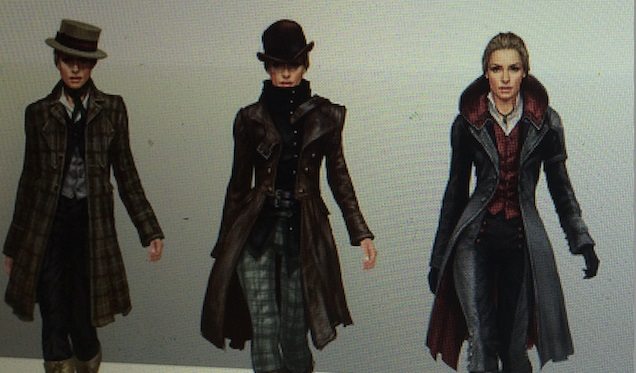 There’s no doubt Evie is looking pretty fierce, though there’s no word yet on whether she’ll let her hair hang down.

Home / Game News / The Girls Are Back In Town – Assassin’s Creed: Syndicate Gets A Female Protagonist