The latest news in the world of video games at Attack of the Fanboy
July 11th, 2017 by Jelani James Sega has provided more news related to Yakuza Kiwami on the PlayStation Blog, announcing a bonus for digital pre-orders and details about the Majima Everywhere system.

The pre-order bonus is simple enough to understand, those who pre-order digital versions of Yakuza Kiwami will get a free PlayStation 4 theme featuring Kazuma Kiryu and Akira Nishikiyama. For now, this bonus only seems exclusive to digital pre-orders, so those who are already getting the steelbook edition are likely to miss out. 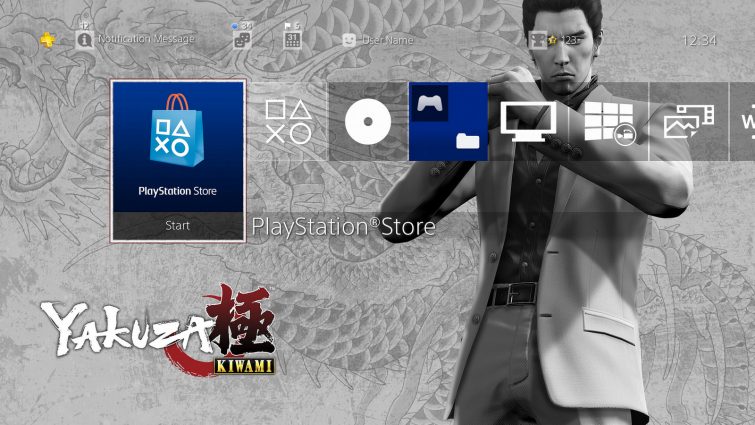 When Sega says Majima is everywhere, it wasn’t kidding. On the blog, Sega notes Majima could be hiding out inside of a trash bin or waiting to ambush Kiryu at a dance club. Sometimes you might even hear rumors about him, like when he’s pretending to be an officer at Millennium Tower who is on the lookout for people carrying suspicious weapons. Doing specific actions in the mentioned area — in this case, swinging around a knife or frozen tuna — will prompt him to come out and confront you in hilarious fashion.

As those who played Yakuza 0 might remember, Majima might be crazy, but he’s also unpredictable and unreasonably strong. Yakuza Kiwami emphasizes this by him fight Kiryu using the various styles the player spent so much money to have him master. Fights against Majima are rarely ever the same and he try to gouge your eyes out in one fight, attempt to rearrange your face with a baseball bat in another and break dance you into oblivion in the next. He has complete access to Heat Actions too, so be prepared to take serious damage if you aren’t cautious.

Though Majima is a tough customer, fighting him is the only way to level up Kiryu’s ultimate style, Dragon of Dojima. With that in mind, you should at least try to fight him, just be wary that he’ll probably find you when you don’t want him to.

Yakuza Kiwami is a remake of the original Yakuza, featuring new mechanics introduced in Yakuza 0. The game is due out in the U.S. and Europe for the PlayStation 4 in August, and pre-orders are now live on the PlayStation Store.