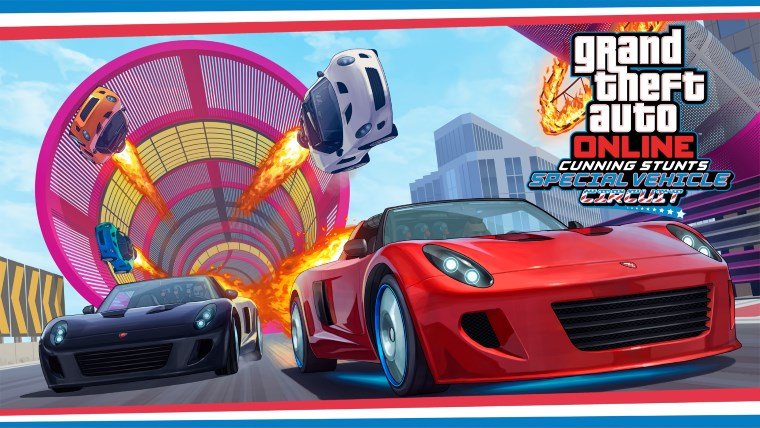 Who ever would have thought that years after release GTA Online would still be ridiculously popular, and that some of its best game modes would be races. Sure, driving in GTA has always been fun, but it was never the main draw of the series. But it is, and it is, mostly thanks to Cunning Stunts. Now we’re getting even more GTA Online Cunning Stunts with the Special Vehicle Circuit DLC, available right now for free.

If you haven’t been sticking with the GTA Online news, Cunning Stunts is essentially the craziest racing you can think of that will work within the GTA physics engine. You’ve got massive loops, huge jumps, and anything that Rockstar and its massive community can think of, thanks to the easy to use map editor. GTA Online Cunning Stunts have quickly taken over many players’ time with the game, and Let’s Play videos from the mode are pretty consistently stuck at the top of Youtube.

So, what is this new DLC adding? GTA Online Cunning Stunts Special Vehicle Circuit adds in brand new vehicles with different zany things that make them perfectly suited to this game mode. Things start off with a little Rocket League flair with the rocket powered “Rocket Voltic”. Allowing for even more massive loops, turns, and jumps, this car looks like it will really change the way you play GTA Online Cunning Stunts.

The Ruiner 2000 is sort of the craziest though, with a parachute and jumping ability that will test your reflexes to the max. Finally there’s the Blazer Aqua, an aquatic vehicle that will allow for very unique races. There will be 20 brand new races ready to go when you boot up the Special Vehicle Circuit mode, specifically tailored for these cars.

And if you needed any more reason to hop back into GTA Online, all of the new races will get doublt GTA$ and RP through March 22nd.