The latest news in the world of video games at Attack of the Fanboy
December 21st, 2016 by Damian Seeto 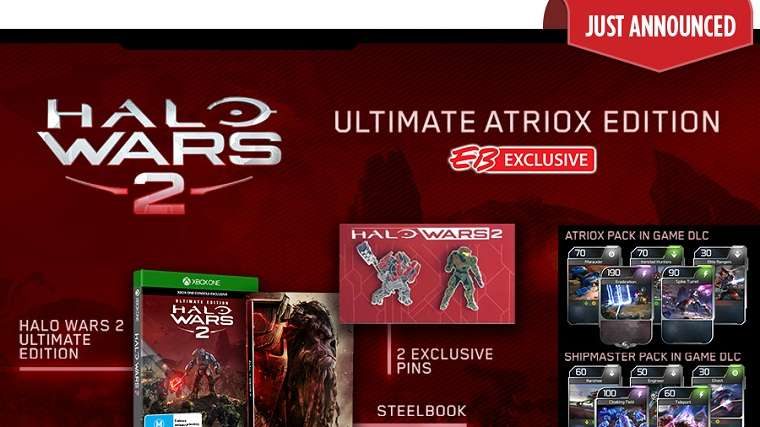 EB Games Australia has now announced another exclusive edition for its stores. This time the retailer has revealed the Halo Wars 2 Ultimate Atriox Edition.

As you can see from EB Games Australia’s official website, this Halo Wars 2 Ultimate Atriox Edition is available to get on both Xbox One and PC when it releases in February. The Xbox One version is out first on February 17th, 2017 while the PC version is out on February 21st, 2017.

The 2 exclusive pins are available if you pre-order the game at EB Games before release date. This is a limited time offer only and while stocks last. As always, both this Ultimate Edition and the pins are exclusive to EB Games. No other retailer is going to offer this.

This ultimate edition of the game costs more than the standard edition. In Australia, this is going to set you back $119.95AUD. EB Games has also listed a normal Atriox edition that costs $99.95AUD. This comes with the same things, although it lacks the Season Pass. The Season Pass should give you access to even more DLC packs in the future once they get released.

As of time of writing, it looks like both Atriox editions are exclusive to the Australian branch of EB Games only. Checking on the EB Games New Zealand website, it only shows the Standard Edition of the game as well as the Ultimate Edition. If you live in New Zealand, there’s no extra pins or other things for you that have been included for Australians.