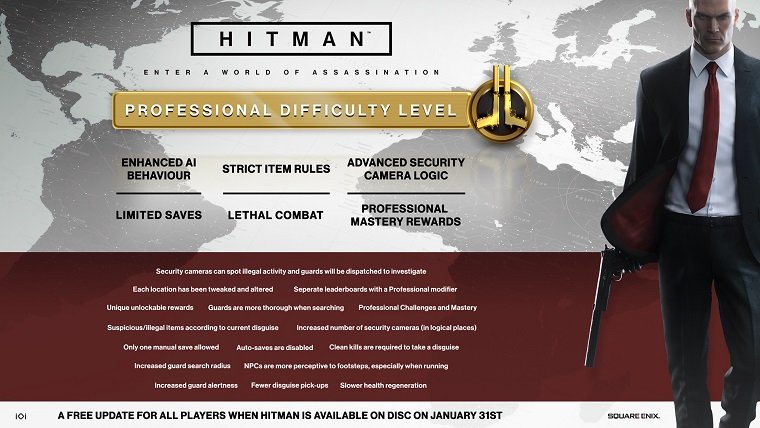 The first season of IO Interactive’s Hitman reboot came to a conclusion late last year, though their starting off 2017 by adding a new difficulty to the mix. The new difficulty is called the Professional difficulty, which will be coming to the game through a free update on January 31st to coincide with the game’s physical release.

As for what this mode has to offer, the developer says that the “Professional Difficulty Level offers extended replayability, new game features, a separate mastery track with unique rewards, tweaked game mechanics and new AI behaviour that combine to create an entirely new experience for all players, whether they’re looking to test themselves in a more challenging environment or earn bragging rights at the top of the leaderboards, which are now separated between difficulty levels.”

This mode can also be selected for “all Story missions in Season One, excluding the Prologue. To unlock this new difficulty level, you will need to reach Mastery Level 20 for each location. As a clear example; reaching Mastery Level 20 on Paris will unlock Professional Difficulty Level on Paris. Our ‘live content’ such as Elusive Targets and Escalation Contracts will only be available on the default difficulty level, which we are now calling Normal Difficulty Level.”

We’re still waiting on the patch notes that will be coming with the update, though the developer says that the notes will be released closer to the update’s launch.

Hitman ended 2016 with the release of the surprise Christmas DLC called Holiday Hoarders, which had Agent 47 hunting down the villains from Home Alone. The thieves are Harry “Smokey” Bagnato and Marv “Slick” Gonif, who starred in the first two Home Alone movies. The two criminals fled the US due to too many “botched break-ins,” which lead them to take their unlawful ways to a brand new place.

Hitman is available on PlayStation 4, Xbox One and PC, and if you never played any of the game’s first season then be sure to check out our review of it.