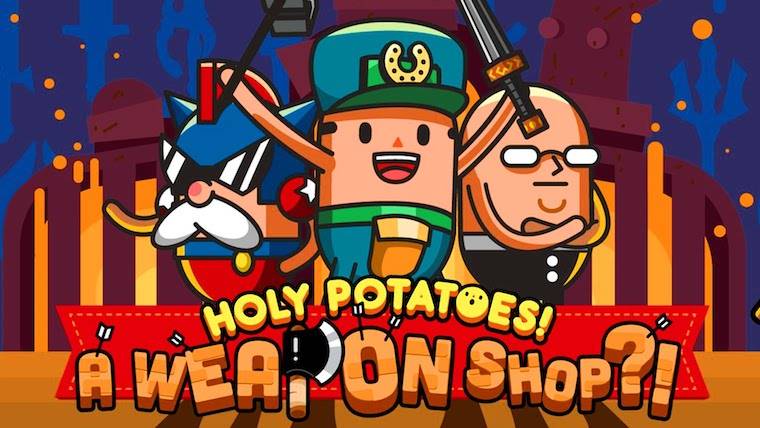 As strange as it sounds, there exists a series of resource management games called Holy Potatoes! in which you play as potatoes. These indie games are currently available for PC, Mac and Linux, with the first entry in the series, Holy Potatoes! A Weapon Shop?!, also available for mobile devices. However, it was recently revealed in a press release that the whole trilogy is coming to PlayStation 4 and Nintendo Switch.

The press release stated that developer Daylight Studios is teaming up with publisher Rising Star Games to release these games on PS4 and Switch throughout 2018. Holy Potatoes! A Weapon Shop?! is scheduled to come to the consoles this spring, while its rogue-like sequel, Holy Potatoes! We’re in Space?!, will be available this summer and the third installment, Holy Potatoes! What the Hell?!, comes to consoles this fall. As you could probably guess from the titles of each game, the first installment involves managing a weapon shop, the second game takes place in space and the third in hell.

In speaking about this new partnership, Managing Director of Rising Star Games Martin Defries stated, “We are sure that interest in these games will be shared by the Sony and Nintendo audiences across Europe and the USA. We are looking forward to collaborating with Daylight Studios across the longer term.” Meanwhile, Daylight Studios producer Faizan Abid said, “Rising Star Games is an amazing publisher and we are thrilled to be working side by side to bring the Holy Potatoes! series to a wider audience of two new platforms.”