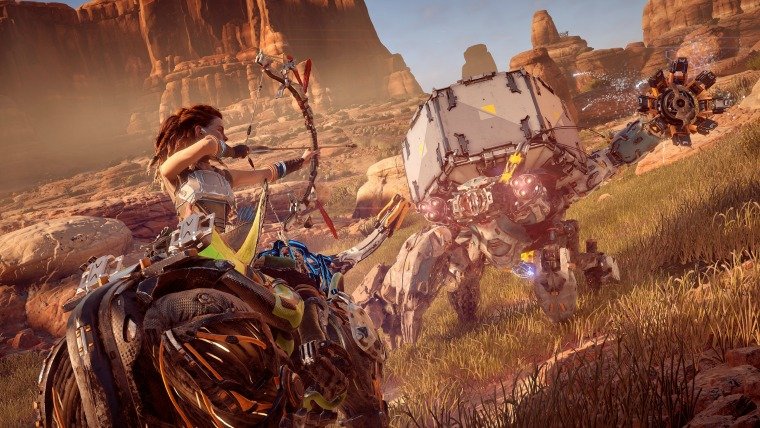 There are only a few days left until Horizon: Zero Dawn is released, so the PlayStation Blog has released new details on how Guerrilla Games designed the big machines that so many previews (and reviews, like our own) have been in awe of.

Director Mathijs de Jonge says initially his team wasn’t sure just how “animalistic” they should go when it came to the machines’ design, adding that dinosaurs were actually not their first design choice.

“We did some machines that were more like scorpions,” he says, “but we noticed that shooting at it was really problematic… the legs were so thin you barely had any surface to hit.” They also decided not to go with more alien-looking designs, finally settling on dinosaurs, which just looked better overall.

From a gameplay perspective, the decision also made sense, as it allowed the developers to make creatures with multiple layers that could be shot off and approached from different strategic positions. If all of the reactions from fans and reviewers are any indication, they made the right choice.

Lead narrative designer John Gonzales calls the machines, which protagonist Aloy must at times hunt, at times avoid, and always beware, “the masters of this Earth.” Each type has its own patterns and mannerisms, forcing players to approach each fight in a different manner if they want to survive.

“If you’re tactical about where you’re shooting you can do a lot more damage,” says David Ford, lead quest designer. “If you’re shooting the sides or the armor plating of a Watcher for example, it will eventually go down, but during that time its buddies can swarm and overwhelm you.”

Horizon: Zero Dawn will be released Tuesday, February 28th in North America, March 1st in Europe, and March 2nd in Japan, with support for both the basic PlayStation 4 and the PS4 Pro. Experts are expecting it to be a big hit for both Sony and Guerrilla Games.