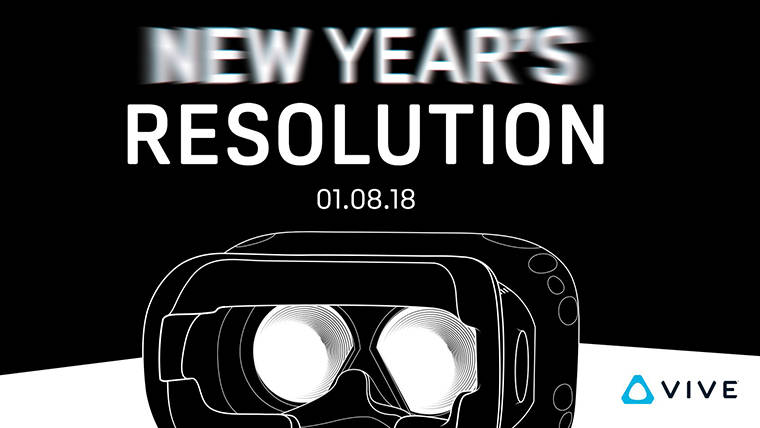 A higher resolution headset may be on the way from HTC VIVE.  A teaser was posted earlier regarding a “New Year’s RESOLUTION” that has many in the VR community speculating on what’s next for the VIVE.

The HTC Vive Twitter account posted the image above with only two hashtags:  #newyearsresolution #HTCVIVE, but the clever advertisement says it all.   With a fuzzy “New Year” and sharp “Resolution” text this simple tease has many speculating that VIVE will be announcing a headset that’s capable of higher resolution, potentially updating the panels for the headset.

Whatever it may be, the news looks like it will arrive on January 8th, 2018.

This date will be a good one to announce something big for HTC VIVE.  CES 2018 will be going on and it very well could be the spot where VIVE reveals what they’re teasing here.

VR had a decent year in 2017, but didn’t quite catch on like everyone expected with the release of the PlayStation VR.  Unfortunately it’s still coming down to the software that’s available for the devices.  While there were quite a few good ones, like Resident Evil, GORN, Superhot, and others… There were just as many if not more utter disappointments.

If you’re planning on buying a VIVE over the weekend, you might want to hold off for a couple days to see what they are about to announce.