The latest news in the world of video games at Attack of the Fanboy
Updated January 23rd, 2014, by AOTF Staff 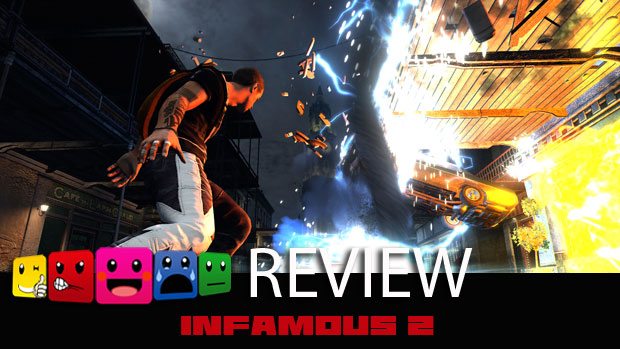 inFamous 2 is a single player, Open World game, exclusive to PlayStation 3. The second chapter in the best selling infamous franchise, this immersive adventure offers a powerful, emotional, and visceral take on being a superhero, and the choices that involves. Features include: a unique blend of electrical and melee combat abilities, epic boss battles, a new morality system allowing for two possible game endings, and user generated missions.

You’ll assume the role of Cole McGrath, more confident and with more focused energy burst abilities. Blamed for the destruction of Empire City, Cole must make a dramatic journey to discover his full super-powered potential – and face the final confrontation with a dark and terrifying enemy. This being, a creature of pure power and destruction is annihilating the East Coast. To stop this menace, Cole must find the key to unlocking his undiscovered powers hidden deep within New Marais. Standing in the way is a power-hungry dictator that will stop at nothing to rid him from the city. Gain enough power to defeat The Beast or witness the destruction of the world. The power is in your hands. – Sucker Punch 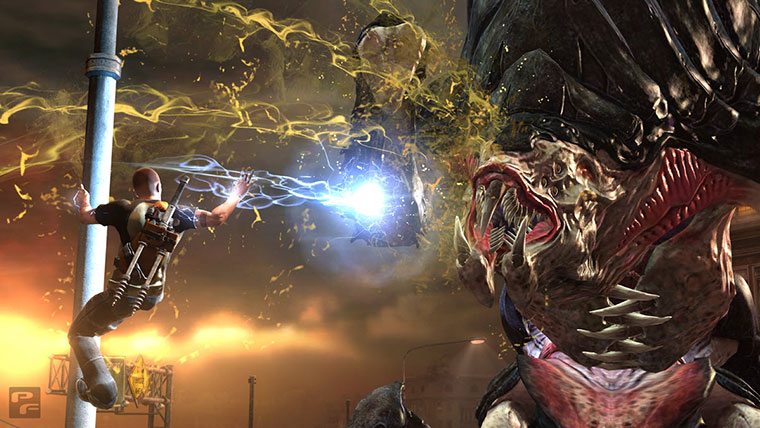 Bigger and badder in nearly every aspect – When the original inFamous launched two years ago, it held alot of promise.  An open world game that gave you the powers of a superhero with a morality complex.  A game that let you determine the fate of the city you resided dependent on your choices.  It was a great premise, and still is.  More importantly, the way which the game played was probably it’s best asset.  Your acrobatic, lightning infused hero, truly felt like a superhero should.

Some may have thought that the original inFamous didn’t quite measure up to the lofty expectations that the game set for itself, but it was certainly a great first effort.  Now with inFamous 2, the game may still not have reached perfection, but has improved upon nearly every facet of the game to make this iteration the best yet.  What inFamous2 does a great job at, is empowering the player.  The feeling of gliding through the air, landing ridiculus jumps, sliding down electrically charged ropes, and of course, dispatching your enemies with a wide array of lightning attacks as well as new elemental attacks that will be unlocked during the game’s lengthy campaign.

New Marais has a ton to do and see – The new setting for inFamous 2 has Cole journeying South, to fictious town of New Marais.  It’s not very hard to see where Sucker Punch got their inspiration from, New Orleans.  Taking the setting from Empire City to New Marais (Orleans) has afforded the developers to be much more liberal with their use of a much larger pallette of colors.  The game world and architecture of New Marais is also more inspired this time around, and it gives the city a very distinct look and feel than that of the previous game.  Exploring your abilities is one of the most fun activities to do in either inFamous or inFamous 2, and with this new playground having been visually upgraded it’s more fun than ever. 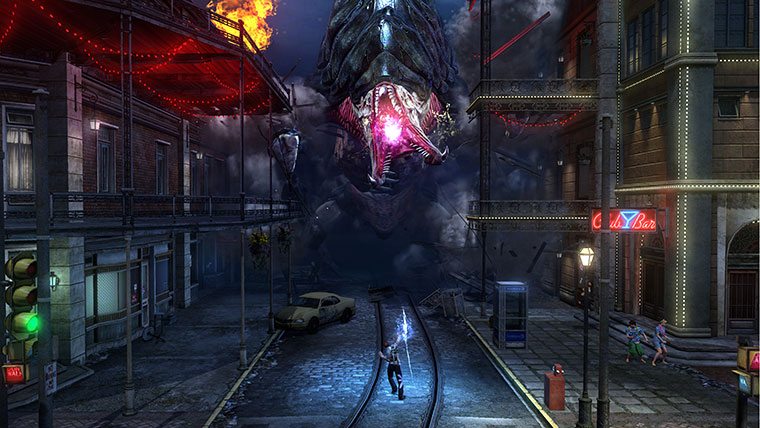 One of the best looking games on the PS3 – This is probably arguable depending on your taste, but in my opinion, inFamous 2 is one of the best looking games on the PlayStation 3.  From the cinematic melee action sequences to the larger than life boss battles of the game, you’re in for a treat from a graphics standpoint with inFamous 2.  As mentioned above, the new setting for inFamous 2 is largely inspired by one of the most colorful cities in the U.S., Sucker Punch does a great job of using the inspiration of the Big Easy and making a vibrant and colorful world that is just begging to be explored.  If you played the original you’ll instantly notice and appreciate all of the work put into revamp the game from a visual perspective in nearly every aspect.  The graphic novel overhaul to the cinematic presentations that move the story along are a nice contrast to the gameplay.  As the game continues, new powers are unlocked, and battles get better and better looking adding more color and spice to the already rock-solid presentation.

Playing in the Sand – Sucker Punch has the open world sandbox genre down pat.  inFamous 2 is an open world game that doesn’t really feel like you are performing arbitrary actions like many sandbox games do.  Regardless of what you choose as you current objective, you’ll find that you are in some way moving the game along, bettering your character, or working towards a bigger goal.  There are around 40 story missions in the game, and another 60 side missions to explore, as well as power increasing blast-shards to collect.  Needless to say you’ll be playing for awhile if you’re the type that has to ‘catch them all’.   With the way that inFamous2 pans out, you’ll likely get double your monies worth in the single player portion of the game.  Considering that you enjoy yourself in your first playthrough, inFamous 2 can play out in an entirely different fashion depending on the decisions that you make throughout your time with the game.

But once you are done with the single player portion of the game, Sucker Punch included a system for users to generate their own levels for you to explore, that focus on whatever your heart desires.  You can play combat based missions, puzzle-like scenarios, or even story driven content, and it will also earn you karma points at the end of the day.  It’s a blast to get in and play through the 100’s if not 1000’s of user generated missions if you so choose, and they contain unmeasurable value if you are the creative type that wants people to play your creations. 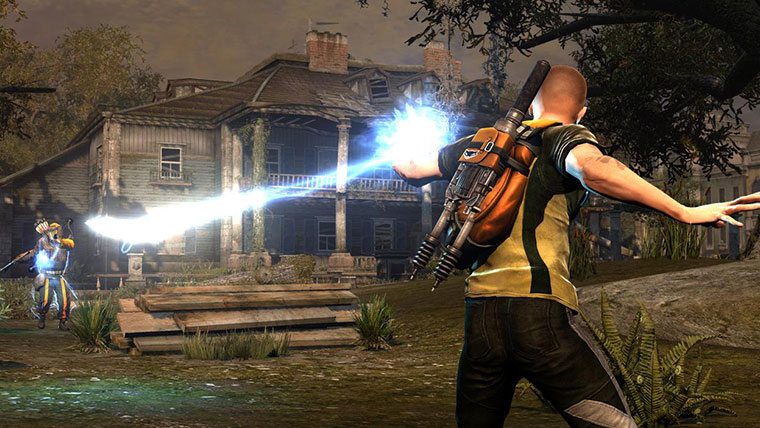 Some glitch camera work at times – InFamous 2 is chocked full of combat at both long ranges, and close quarters.  It won’t take long to find inFamous 2’s Achilles heel when it comes to gameplay, and it’s in the camera work that provides some frustration in close quarters battles.  Sucker Punch takes a much more cinematic approach to the melee combat in inFamous 2.  You’ll be weilding the AMP which is an electrically charged melee rod that is completly awesome in theory, but as good as it all looks, it has its problems in the actual gameplay.  While fighting off multiple opponents with the AMP the camera can go from decent to downright poor in a flash, leaving you disoriented and open for attack.  inFamous 2 is not an easy game, and most assaults on enemy positions need be thought out properly if you want to make it through on one go.  But the needless restarts that the odd camera angles make for, are definitely one thing that’ll leave you scratching your head.

Minor hiccups in the free flowing movements – Free running the city is great in inFamous 2, barring that there is nothing consequential happening at the moment.  It’s great fun to chain together leaps, slides, and vaults to traverse the environment, but when the chips are down it can be quite frustrating when you absolutely must make a specific jump and you are seemingly stuck on a specific piece of the environment.  inFamous 2 has a system that seemingly aids you in making these transitions between objects, so as you are moving around, Cole will appear to be gliding from object to object, fluidly.  What happens is this gameplay mechanic carries over to action sequences and it just doesn’t work very well when the ish hits the fan.  It leads to playing through sequences numerous times before getting it right, and leaves a sense of anti-climactic accomplishment.

Story kind of slow at the onset – Getting yourself prepped for the Beast’s arrival in New Marais is an interesting premise in itself.  Shortly after firing up inFamous 2 for the first time, you’ll understand completely what your objective is.  And that is to get enough power so that when the Beast does arrive, you’re going to be able to do something about it.  Though outside of this general explanation behind the game’s overarching plot, not much more is explained for hours into the games single player campaign.  Sure, there’s a constant meter showing you the path of the Beast, and how it is ripping down the Eastern Seabord.   You know it will ultimately meet you for your showdown, but the real story is in New Marais, and the game just doesn’t do a good enough job to set the stage for you to really get engaged.  Because of that, I found myself basing my morality choices more on personal preference rather than anything that the game had given me to support my choices.  It certainly doesn’t help that the citizens of the city are nearly zombie like in their movements and interactions with you in the city.  There’s really no incentives set to make you want to save a citizen of the city, other than as I said, the personal preference to do the right thing or to earn power-ups.  In the case that a battle breaks out on a crowded street and there are civilian casualties you can attempt to heal the wounded citizens and earn karma points in the process, they’ll thank you and you’ll be on your way.  I think by possibly adding more soundbites to the game from the inhabitants of New Marais the city could have felt like a living, breathing, organism rather than the pretty mannequin that it comes across as.  With a game like inFamous 2, and all of it’s Sandbox glory, there are times when you lose sight of the overall goals of the game.  The game does do a decent job at trying to funnel you in the directions that you need to go, but because of the nature of the game, the pacing is miffed and it’s easy to just lose track, and in the worst case scenarios, lose interest overall.  The game pulls you back in quickly, but there were at least half a dozen times where I continued my game, asking myself where I was, what I was doing, and other than running to the next white marker, what I was supposed to be doing next to move the story along.

inFamous 2 is so close to sandbox gaming nirvana that it hurts to see some of the minor annoyances rear their heads so often.  Fortunately, there’s so much good (or evil)  packed into inFamous 2 that it’s easy to overlook some of the flaws of the game.  It’s a game that you’ll likely need to take a hearty bite into just to wrap your head around the possibilities that lie in wait in New Marais.  But once you do, you’ll be hooked until the final credits roll, both times.