If the wind keeps blowing the way that it is currently, it will not be long until the Android and IOS marketplace completely pulls Nintendo from the throne of portable gaming that they are so desperately clinging onto. Third party support for devices such as iPhone and iPad certainly is not lacking, especially when compared to the woeful selection available on the Wii U. For the IOS market in particular, it costs a pittance to produce a title whilst the reach of the app store is near limitless. However, in such a competitive arena it can be difficult to establish a development company even if they generate great content; hence why I feel Japanese developers Kairosoft certainly deserve to be nudged a bit closer to the spotlight. 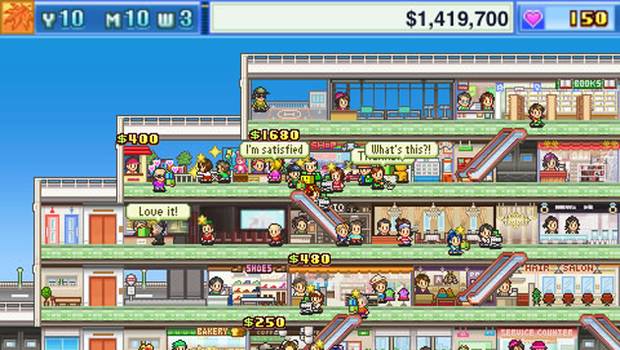 Kairosoft began and remains as a small Tokyo-based workforce whose ability and dedication to each of their delicately crafted simulation titles stands as a depiction of how all good companies should function. Basically, Kairosoft games make me giddy. Giddy essentially being that sense of euphoria you experienced in childhood when the anticipation and excitement of something in the near future made you produce strange, involuntary noises. It may seem odd that a small developer for IOS and Android could be so alluring to anyone when compared to heavyweight PC and console contributors. Yet I can recount many titles from many big name developers that I have abandoned midway through; which is not the case with anything Kairosoft has had a say in.

Kairosoft’s game library is itself very small and releases tend to be infrequent, but there is that clear philosophy of motivation and patience yielding the best results every time; a scale model Valve, if you will. To cut a long story short (which I haven’t really done), you can look back over the years at Kairosoft creations and observe the formula that has succeeded in pleasing time and again whilst adding only subtle changes here and there.

It goes without saying that Game Dev Story is the outstanding Kairosoft title. This is usually the first game that everyone, even three years on, will initially download and it is pretty self-explanatory. After all, this is the story of your very own game development company. Self-awareness on Kairosoft’s part is evident as it seems almost autobiographical to a certain degree. Your company is born with only a few employees and your good intentions invested, though you will soon need to climb up the business hierarchy on the way to number one titles, giant workforces and, of course, booth babes.

The charming art design lends itself beautifully to game flow. Every little trumpet and controller indicator that appears to highlight progress in the production of your micro-titles provides immense satisfaction. Events are well-paced to keep a balanced yet increasing momentum to gameplay and though these are obviously scripted and progression is relatively linear, uncertainty in the success of the games you create and staff capabilities means it never feels that way; no matter how many times you start a new game. This list of positives is something you can take as innate for Kairosoft; a constant across their entire spectrum of titles.

Having built up some momentum and determined to prove they were not one hit wonders, Kairosoft took community feedback into consideration and produced a football theme sim titled Pocket League Story. For those not a fan of the sport, Kairosofts unique style has still managed to pull in an impressive number of downloads and positive reviews which suggests it has overcome this barrier.

For gamers dedicated to sports titles, it was a sneaky way to introduce them to a new style of game that simply did not exist on IOS at the time. The random, yet fluent gameplay is still present alongside the option to buy players and facilities to expand. Though this time, however, Kairosoft took away some of the players agency during key points in the game; namely the matches. During the creation process in Game Dev Story, players were in full control of their project and staff from start to finish. Beyond the whistle in Pocket League Story however, the outcome is more or less out of the players hands. Minor elements such as auras and tactics can be altered, though the overall experience is a lot tenser and thus, more immersive.

By mid-2012, Kairosoft demonstrated that they were still full of innovation, with releases ranging from the tales of an aspiring racing driver to replicating the responsibilities of a mall manager. The next logical step would therefore be to pander to the vastly over-subscribed medieval town simulation crowd, right? Well yes, actually.

Dungeon Village not only highlighted what Kairosoft has, it also showed what other developers lack. Namely that auteur touch that will bring a dedicated fan base back time after time. Look through the app store and list how many games fit this description; Build a town, fight monsters and collect loot to expand. This style of gameplay usually goes hand-in-hand with grind and frustrating repetition. Dungeon Village confidently embraces this theme, aware that simplicity is the key. Completing repetitive tasks doesn’t feel like a chore as lovable heroes coupled with those ever-present twists and turns continue to keep proceedings fresh and entertaining.

Dungeon Village also lives as an example of Kairosoft’s own progression, as the level of depth in-game has been heavily amplified. Character animations have been improved, whilst variety and complexity within the title has increased. The over-arching objective is present as always, though the ways in which you can accomplish said objective really are vast. Numerous buildings, heroes, weapons, items and dungeons mean that there are plenty of variables when it comes to moving forwards. Kairosoft have clearly indicated that they have no intention of relaxing when it comes to ambition and, as I say, Dungeon Village is a sterling metaphor for that.

All the way to the recent history and surprise, surprise; I find myself happy to sink hours of my life in to Dream House Days. It really opened my eyes when I realised that I was spending more time picking out flooring for the virtual tenant I had modelled on myself (not vain) than I would for my home in reality. Run your own apartments by furnishing rooms, selecting tenants and controlling how their lives play out (behold the power of the landlord).

If the high price-tag has been dissuading you from the series (roughly £2.50 per game) then Dream House Days is the place to start. The full game is free to download, whilst in-app purchases are not required to advance. There isn’t really a definitive objective this time around, as smaller tasks in greater numbers has become the new format. There is an element of drama about each tenant as your interactions with them differ on a day to day basis and you can certainly expect the unexpected to come knocking on your door.

”Everything is kept so compact and fine-tuned that it matters little what the over-encompassing theme is.”

It doesn’t take a genius to see where I stand with Kairosoft and their ongoing simulation series. From the sound, to the art, to the core game mechanics, everything is kept so compact and fine-tuned that it matters little what the over-encompassing theme is. Subtle additions such as the pop culture references for core gamers (Virtual Kid in Game Dev Story, Harry Gorn in Dungeon Village) demonstrates a clear intention for Kairosoft to connect with their fans. Of course there are small nit-picks such as replay value and pricing, but these really are minor in the grand scheme of things. The only major issue within their pristine portfolio is the level of awareness that their releases receive and I imagine this will be remedied soon enough. They really do feel like the company that cares and there is no excuse for them to not have a permanent seat in the top charts. This also means that there is no excuse for you to not dip your toe in the sea of Kairo. Come on in, the waters fantastic.