Israeli League Is Now The Most Wanted In FIFA 17 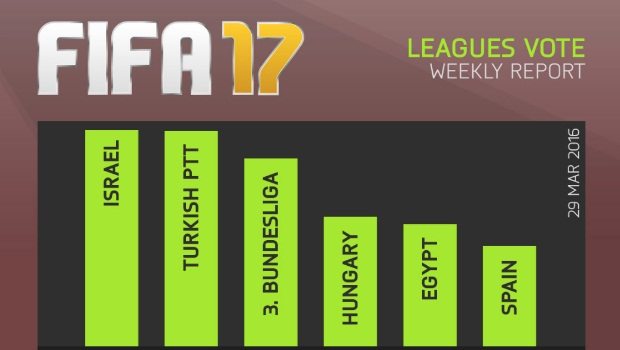 Each year fans vote on leagues that should be added in the FIFA games each year. For FIFA 17, a lot of fans would like to see the Israeli League.

As reported by GamesRadar, FIFPlay has updated its fan survey for the most requested leagues to be put into FIFA 17. A couple of months ago, the Turkish PTT league was on top but now they have been usurped by the Israeli league.

Over 422,905 people voted for the Israeli league which is slightly above the 422,235 votes for the Turkish PTT league. Both leagues got 16 percent of the total votes of the entire survey which is ahead of the rest of the pack.

Over 2.6 million people voted in the polls and the results were sent to EA Sports. The polls have worked in the past as certain teams and leagues have been added in previous games due to overwhelming popular demand.

The only competition that FIFA 17 has to face is a bidding war with Konami’s PES 2017. Both EA Sports and Konami fight for licenses each year and some clubs are only exclusive to one franchise.