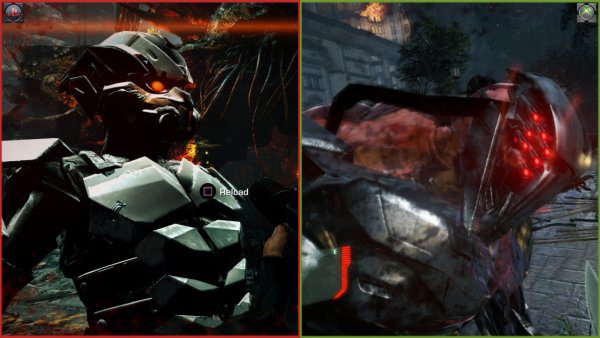 When talking about graphics and current generation first person shooters, 2011 has seen two of the best looking titles ever, with more on the way.  Some of the best looking shooters of this generation are due out in 2011: Battlefield 3, Rage, and the recently released Crysis 2 and Killzone 3 all have and will offer some really excellent visuals to stare at in amazement as we mow down row after row of enemies.  Our friends at Lens of Truth have taken these first two offerings and put them through their paces in a showdown between Killzone 3 on PlayStation 3 and Crysis 2 on Xbox 360.

Looking at things like Graphics, Performance, and Loading the guys at Lens of Truth looked at the two games in a variety of situations to declare the winner thus far in 2011.

What really got our attention, and what sets Killzone 3 apart from the competition are its’ in-game cinematics. Aside from Killzone 3’s opening cut scene, all others used in-game props, and were rendered using Killzone 3’s in-game graphics engine. Let us just say, they look amazing. As for Crysis 2, we were really disappointed with the FMV’s it presented.

For the most part Killzone 3 ran a consistent 30 FPS with a few occasional, and very slight, drops with no screen tearing at all.  Crysis 2 on the other hand dropped FPS noticeably more than Killzone 3 however.

Most of the load times for both Killzone 3 and Crysis 2 were masked by pre rendered cut scenes and make them almost invisible your first time through.

Lens of Truth gave both games their due, but in the end “the graphics crown still belongs to Guerrilla’s Killzone 3.” Claiming that “not only does it look better but its more stable.”  Is it too early to crown Killzone 3 the victor of first person shooters for 2011?  With games like Battlefield 3 and Rage due out later in the year, it might be.  For the full in-depth analysis head on over to Lens of Truth for a ton-of side by side comparisons, video, and more.