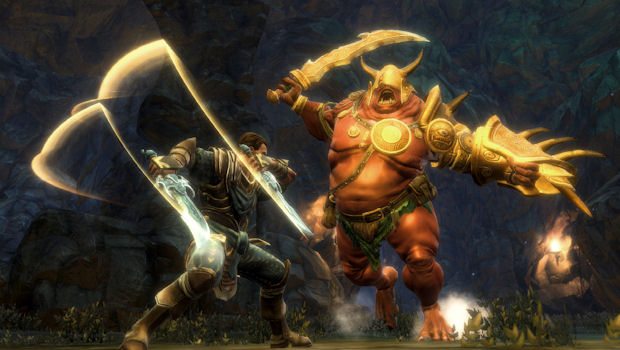 As you probably already know, the Kingdoms of Amalur: Reckoning demo recently went live on Xbox Live, PSN, as well as Steam. You also may already know, depending on your personal experience, that the game in its current demo form is glitchy as s**t. Seriously though, don’t let that stop you from giving it a go. Whether you’re an RPG fanatic or simply a Mass Effect fan trying to get some pre-launch unlockables, Kingdoms of Amalur gives gamers a title they can look forward to if they’re willing to look past the bugs.

First, the glitches. I would be remiss if I didn’t state how it took me a total of three times just to complete the full demo. My first playthrough ended with a freeze at the point in which you’re taught stealth tactics, and again during the fight with the rock troll. Beyond that, I noticed extremely evident glitches in regards to the cutting out of audio, the involuntary skipping of dialogue sequences, and the occasional ‘headless horseman’ bug which causes the head of the talking NPC to disappear completely. At first, I figured I ought to delete the demo and re-download it until I realized that others were experiencing the same issues. Talk is that the code 38 Studios released for this version of the demo is not the one that will be launched, which is good news for those of us having trouble just getting through a 45 minute trial period.

Putting these problems aside, Kingdoms of Amalur has quite a bit of potential and there are certainly remnants of that visible throughout the demo. Ken Rolston acts as the game’s executive designer. Why is this significant? Rolston also served as the lead designer of two Elder Scrolls games: Morrowind and Oblivion.

A short narration in the beginning of the demo introduces the story at the outset of the game, informing you of the ongoing conflict between the evil empire of the Tuatha and the mortal armies of Amalur. You’re a soldier of the latter, and you start the game dead. That’s right, before you ever take control of the game’s protagonist, you don’t actually exist. How’s that for an attention-grabbing first act? Before you miraculously come back to life, you must first choose one of four classes to join. There are two humanoid classes to pick from which include the Almain, a warlike and religious people, and the Varani who are seafaring mercenaries. You can also choose from two Fae (elves, in layman’s terms) classes – the Ljosalfar, an ancient race from the frozen lands of the North, and the Dokkalfar who place emphasis on magic and diplomacy. After picking a race, you’ll be prompted to pick a “patron”, or god, who will endow you with certain abilities relative to their specific expertise. For example, the patron of Fire grants you +6 fire damage and resistance while the patron of War will give you +5 physical damage and armor.

After you’re done trying to make a more dashing replica of yourself with the character customization tools, your journey begins. You wake up amongst a group of rotting corpses and commandeer a rusty sword from a nearby skeleton. The beginning sequences mostly serve as a tutorial for the game’s combat system, teaching you how to attack, block, evade, etc. You’ll come across an inviting little Gnome named Encel after saving him from two Tuatha guards. He was one of the Gnomes dumping you into the corpse pit, so you have him to thank for having to wake up next to that. Encel informs you of what you already know: you were dead just a few minutes ago, and suddenly you’re now standing in front of him. He then tells you to locate Professor Hughes who will examine your “coming back from the dead” situation further. You must then fight your way to his laboratory, slicing through Tuatha soldiers as well as giant spiders. In Hughes’ laboratory, you learn that you are the first success of “the Well” experiment – a project initiative to recreate the dead. The Tuatha have apparently learned of it and wish to shut it down, which is why they are storming the tower when you first come to. After defeating one very aggressive rock troll, you eventually escape the tower to a lush glade area where you are prompted to talk to Agarth, a ‘Fateweaver’ who Hughes believed would be of help.

From that point, you are given 45 minutes to explore the areas of Allestar Glade, Gorhart Village, and Odarath. Within these flourishing environments you’re immediately given two side quests to deal with. One includes finding a potion for a Fae who has been attacked by an unknown perpetrator, and the other involves searching for a monk who has gone missing in the northern woods. It is worth noting that if you wish to unlock the Omniblade daggers for Mass Effect 3, you must spend all 45 minutes of the allotted demo time.

Though the stylized graphics slightly reminded me of Vivendi’s The Hobbit, the combat is instantly reminiscent of the Fable series. For those who found Fable’s combat too methodical at times, the quickness of battle within Kingdoms of Amalur combined with its deep progression system and wide array of weapons should be more than enough to satisfy the needs of the common RPG fan. A slick inventory and menu system also allows you to navigate weapons, armor, items, and spells easily, and it never feels as if it is interrupting the flow of the battle. What perhaps stands out most is the “reckoning mode” feature which allows you to enter into a sequence of increased speed and reaction time after the middle meter in the upper left-hand corner is filled. It essentially allows you to rip the ‘fate’ from the helpless victim, killing any other nearby enemies in the process. Pressing “A” (360 version) near a downed enemy during this phase enters you into a button pressing sequence similar to those found in the God of War franchise and particularly of Kratos’ “Blade of Sparta” ability. Should you correctly press the succession of buttons, a final button will appear and how quickly you mash it will determine how much XP you get out of the sequence.

I found out quickly that my hit-and-run tactics I used so frequently in Skyrim were useless within Kingdoms of Amalur, which will rely heavily on the use of regenerative potions for healing. Health does regenerate, but it does so very slowly compared to your mana (used for spells and all things magic) which recharges much faster.

The class progression system is visibly comprehensive, as leveling up gives you the opportunity to improve certain weapons and combo moves which are each conveniently given a tutorial in your menu. There are three main abilities to level throughout the game: Sorcery, Might, and Finesse, and each weapon or ability within these classes has its own expansive skill tree. Even beyond that, there are also three classes of “destinies” for the player to choose from including Brawler, Rogue, or Acolyte. When you level up, you’ll be given the chance to gain abilities or powers from higher ‘tiers’ of each respective destiny. Depending on your play-style, you’ll of course have to choose accordingly.

In short, if you’re not already a fan of the fantasy-RPG genre, Kingdoms of Amalur: Reckoning most likely will not sway you in the opposite direction. Though it may be difficult to tell from the bug-ridden demo, Kingdoms of Amalur looks to provide a smooth, streamlined combat system with a thoroughly detailed class progression structure. If you enjoyed playing Fable or anything of the sort, it’s certainly worth the hard-drive space. If the glitches make you want to throw your controller or mouse in disgust, just remember, there are a pair of Omniblade daggers waiting for you at the end of the frustrating rainbow.